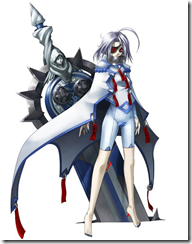 Λ-11- was a replacement for v-13- in arcades, but both characters are in the console version. v-13 is an “unlimited character”, which can be unlocked just by playing BlazBlue: Continuum Shift. If you can’t unlock her, you will be able to buy her via DLC.

Makoto, a brand new squirrel-girl, is available only as downloadable content. Aksys says you will be able to fight against Makoto, thanks to an online patch, but you won’t be able to play as Makoto unless you purchase the DLC.

No new on how much Makoto costs, though. BlazBlue: Continuum Shift will retail for $39.99 when it comes out on July 27.