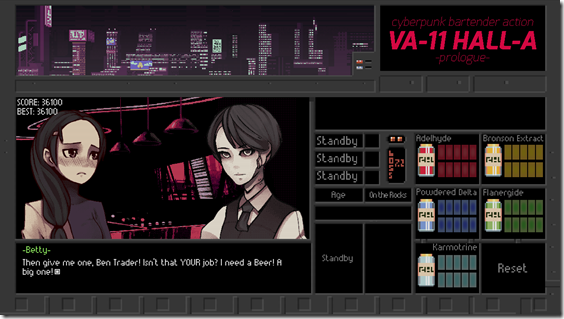 Sukeban Games’s cyberpunk bartender sim VA-11 HALL-A is about waifus, technology, and the hard lives of post-dystopia citizens. The prologue of the game is now available to all those who pre-purchase the full version for Windows, Mac, and Linux.

VA-11 HALL-A takes place in a world dominated by corporations and in which humans are infected with nanomachines that keep them oppressed. Anyone who steps out of line meets punishment by the “White Knight” law enforcers.

As Gillian, a bartender at VA-11 Hall A (known to the locals as “Valhalla”), you supply the alcohol that the downtown population seeks to cope with all the stress. In exchange for the right drink, your customers tell you their  personal stories, opinions on those that suppress them, and the struggles they have at work and on the streets. You may even be able to make them happy by talking to them rather than giving in and letting them feed their alcoholism.

VA-11 HALL-A was originally made the Cyberpunk Game Jam held earlier this year. This prototype can still be downloaded if you choose not to pay anything for the game in the itch.io checkout. Sukeban liked the game so much that it decided to create a full version which is currently in development for “as many platforms as possible”.

VA-11 HALL-A  can be pre-purchased for $4.99 right now. If you pay $7.99 you will also receive the soundtrack. Everyone who pre-purchases VA-11 HALL-A gets immediate access to the prologue of the game on Windows, Mac, and Linux.

Sukeban is aiming for a December release for the full version of the game but notes that there are no guarantees on that. You can keep up with the game’s progress on its development blog.