Earth Seeker, an upcoming Wii game from Crafts & Meister, takes place after Earth is destroyed. Famitsu explains, humans fled the planet in spaceships and crash landed on an alien world. 1,000 years have passed and computers on the ship attempted to terraform the new planet into Earth II with mixed results.

The impact damaged the computers, which blended nature and machines creating monsters like this. 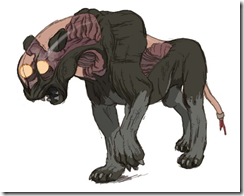 That’s supposed to be a panther with a power cord as a tail. Guardians, the alien planet’s tiny natives, can help you fight these computer created beasts by shooting energy balls. The Guardians aren’t exactly fond of humans because they reformed their home, but they appreciate the alcoholic drinks they can create. It sounds like you can give the Guardians liquor to help you.

While the alien world has changed, it isn’t exactly human friendly either. The atmosphere is toxic and humans mainly live inside spaceships. Famitsu has a picture of Space Ship France, which has an Eiffel Tower in the middle.

Earth Seeker is scheduled for this winter and Kadokawa Games is handling the release.