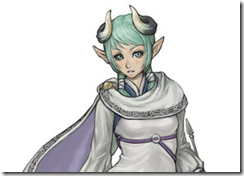 Their article also introduces a new character, a horned girl named Miu (pictured) and Scardyne who is decked out in armor. Check out Famitsu’s article for concept art and new pictures of the game. Looks like Level 5 stuck with the MMORPG style interface for combat.