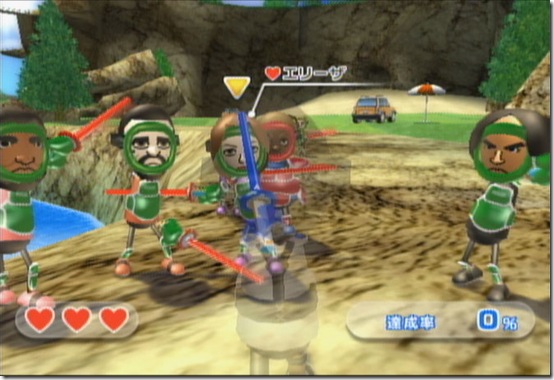 I just got Wii Sports Resort and started with swordplay, one of the twelve games in Wii Sports Resort. Swordplay actually has three modes. The versus mode has been covered pretty well so I’ll quickly summarize it. Two players stand on an elevated platform, automatically walk towards their opponent, swing the remote like a sword, and try to knock each other off the edge. Holding the B button blocks strikes, but I didn’t bother blocking since my flailing figure eight strategy proved effective. In fact it was “invincible”. Computer controlled Miis just don’t put up a good fight.

After I played versus mode I unlocked another mode where I sliced logs and watermelon at specific angles. Wii Sports Resort changes the angles to keep players on their toes. You might slice a watermelon right to left and then cut into two diagonal halves later. Two players compete in the sword test, which makes it like a reaction game meets Wii Motion Plus demonstration.

Finally (five minutes later), I unlocked kumite, an on rails sword slashing brawler with dozens of Miis to fight at once. When you start kumite your Mii automatically runs until it’s surrounded and stopped by a group of Miis. You have to slash and trash the other Miis before they hit you and sap your three hearts. Most Miis are cowards and vanish in a blue light after getting hit once. Kumite mode has mid-boss Miis with two hearts that also block and a real boss with three hearts to face at the end of every level. There are ten stages to play and that take place in various parts of the island. One level is in a castle and in another level you walk up a mountain. Levels also change depending on the time of day. You can fight in the castle at night or at noon. I know these settings are generic, but I they vaguely felt like I was playing The Legend of Zelda Swords. Kumite mode also records your combo so, at the very least, it feels like a standalone WiiWare game.

Since I had my fill of swordplay I gave archery a go. When you’re ready to hit a target you hold A on the remote and Z on the nunchuck while drawing back the nunchuck back as if you were holding a real bow. Let go to fire an arrow. Players have three arrows each round and the stages get harder because the target is further away. At the highest difficulty targets scroll behind wood planks which block arrows.

Kumite mode has been my favorite part of Wii Sports Resort so far. It’s a mode that feels like its should be a standalone game. Perhaps, Nintendo is using feedback from Kumite mode for a future RPG.