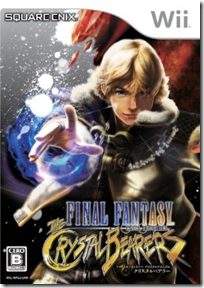 December 26 to be exact, only a month after Final Fantasy Crystal Chronicles: The Crystal Bearers launches in Japan.

Seems odd that Square Enix is missing the holiday rush with The Crystal Bearers, unless they’re keen on parents purchasing reserve tickets as gifts. (Does that ever happen?)

The press release also summarized the story in case you haven’t been following Layle’s adventure.

A thousand years have passed since the events of the original Final Fantasy Crystal Chronicles. The destruction of the Yuke Crystal during the Great War had at once brought the victorious Lilty Tribe prosperity, the defeated Yuke Tribe apparent annihilation, and the world a new age of science and reason. In this new era exists a rare breed of powerful beings called “crystal bearers,” whose seemingly magical abilities have led them to be feared and scorned by the public. The young mercenary Layle is one such crystal bearer, who has been hired to escort the new passenger airship Alexis, the pinnacle of Lilty technology and a symbol of their current dominance. However, when the Alexis is suddenly besieged by a horde of monsters, Layle comes face-to-face with an adversary thought to have vanished from the pages of history, on a quest that may threaten the future of the world…

Also, here are our impressions of Final Fantasy Crystal Chronicles: The Crystal Bearers from E3 and a video showing some of Layle’s gravity bending moves.