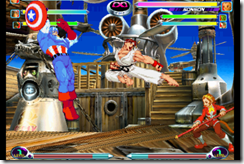 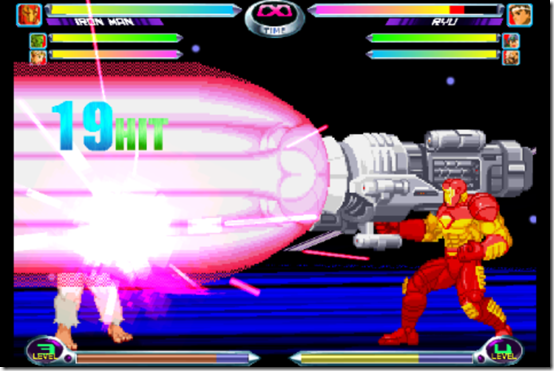 Yes, the controls have been simplified, but the new iOS scheme works better with a tiny iOS screen than the arcade layout… unless you’re playing Marvel vs. Capcom 2 with your phone on a table. Perhaps the biggest difference between the console version and iOS port is filling the screen with projectiles and partner characters is more difficult with the touch screen controls. Marvel vs. Capcom 2 for iOS loses some of its frantic nature, but as a scaled down port it’s more capable and way cheaper than say Street Fighter II for Game Boy.

As a short diversion, Marvel vs. Capcom 2 is enjoyable, but you have to work to see the entire game. Capcom forces players to unlock the full roster by grinding through single player mode to earn points. You start out with only 24 characters. Getting the remaining 32 fighters, all of the character colors, and gallery artwork will take thousands of player points and dozens of hours tapping to through fights to earn them. Marvel vs. Capcom 2 fans will opt to play the game on a TV (or better yet an arcade), so locking the roster makes the iOS version more tedious than it probably should be since users will probably be playing it for just a few minutes at a time.