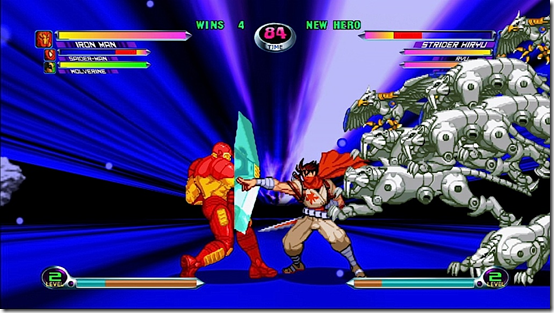 Marvel vs. Capcom 2 is out on the Xbox 360 today. Yes, it’s a port, but ports aren’t that easy to produce. “Suffice to say, the only thing easy about porting is that you know what should be coming out the other side when you’re done,” Christian Svensson, Vice President of Business Development, said at the Capcom Forums.

Marvel vs. Capcom 2 was built on NAOMI hardware and first brought to the Dreamcast. Capcom later commissioned PlayStation 2 and Xbox ports before losing the Marvel license. The Xbox 360 / PlayStation 3 release is based on the original Dreamcast code.

Suffice to say, we’re taking what was Naomi/Dreamcast code that has been output in a way that 360 and PS3 can interpret it and making a whole lot of changes to it on the fly.

We have to add a new front end to account for all of the TRCs/TCRs that MS and Sony have with regard to interface standardization and features like trophies/achievements. We have to include new settings and options and online menu support. We had to plug in matching and lobby systems that never existed and that work with PSN and XBL. We had to optimize net code for a game that was never meant to support it (and that is VERY fast paced which makes it that much more difficult).

At the same time, we’re doing real-time sprite filtering of everything on screen. Rendering all of the 3D assets in resolutions far higher than they were intended and implimenting widescreen support (again, something the original code was never meant to do).

All of these rendering changes never come out the other side “perfectly” the first time so there’s a ton of tweaking that has had to be done to get everything looking just right. At some point, maybe we’ll show some of the early artifacts that we had early in development before those optimizations took place. Could be eye opening for some of you. :)

We had to fix a few bugs that existed in the original version of the game too.

Specifically, Capcom fixed game breaking bugs like the “Gambit glitch” where Gambit gets stuck in a super move.

Does all of that work and the addition of online play make Marvel vs. Capcom 2 worth $15?