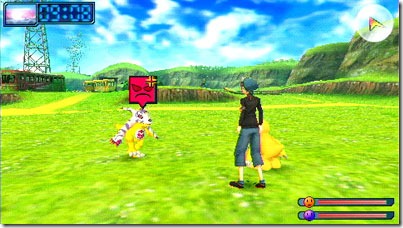 The official site for Digimon World Re:Digitize has released information about the game’s battle system. Enemies appear on the map, so you won’t have to worry about random encounters. However, just because you see them doesn’t mean they’ll always aggressively charge at you. As you approach the Digimon, a symbol will appear above their head. If the symbol is an angry red, it means they want to fight. If it’s yellow, then they’re on their guard, but won’t attack unless you approach them.

The battles take place in real-time, and this includes everything from fighting to item usage. Time even advances when you’re scrolling through your item menu, so timing is important. Your partner Digimon attacks on his own, but as he gets more intelligent (as his Intelligence stat is raised), you’ll be able to use more commands on him. Whether he actually acts upon the commands your character shouts, though, depends on his Discipline and Happiness outside of battle. This means that how you raise your Digimon will also affect his performance in battle (not counting stats).

Unlike in Digimon World 1, an icon will appear over your Digimon’s head when he either follows or ignores your order. 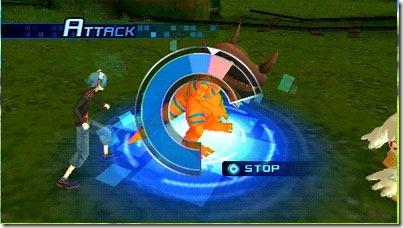 Aside from the usual attacks that your Digimon learns, each Digimon “species” also has its own special attack. These can only be used when a gauge is filled. This gauge fills when your Digimon attacks or receives attacks from the enemy. Once it’s filled, a press of the button make another gauge appear that starts filling up. If you stop this gauge in the red zone, your special attack will be a success.

Enemies also have special attacks, and defending from these follow the same principle. Stop the gauge in the red zone and you’ll avoid most of the damage.