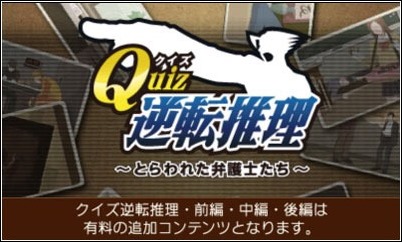 Earlier in the week, Capcom announced that Ace Attorney: Dual Destinies’ DLC chapter, “Turnabout Return,” will be available in the west in addition to Japan, along with DLC costumes for Phoenix, Apollo and Athena.

When Capcom made the announcement, however, they neglected to mention the deduction quiz DLC that takes place in the offices of the Wright Anything Agency. This is because that particular piece of DLC will not be released in the west.

Over on Capcom-Unity, a Capcom representative confirmed, “Unfortunately, the quiz DLC won’t be coming to western territories since it requires an in-depth knowledge of Japanese culture.”