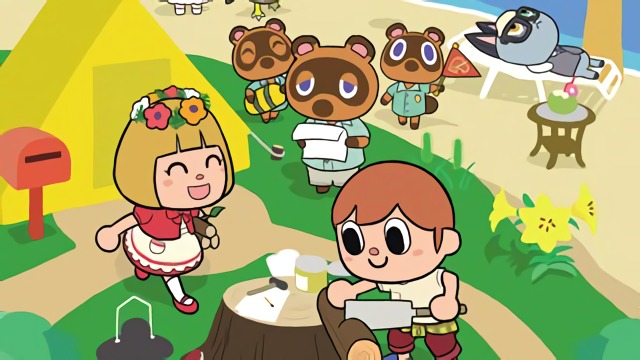 The first volume of the Animal Crossing: New Horizons manga by KOKONASU☆RUMBA is out in English! If you’re familiar with the adaptations of Nintendo games, you might have an idea of what to expect. It’s less like the Pokemon: Sword and Shield manga and more like Kirby Manga Mania. While that might limit its audience a bit, it still is thoroughly pleasant. 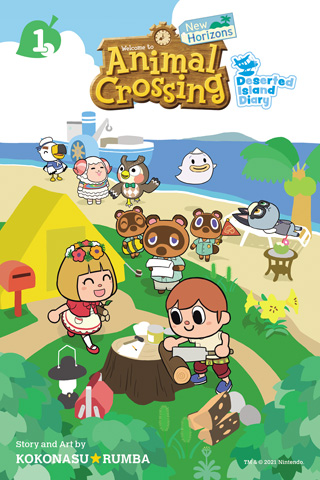 Things in Animal Crossing: New Horizons Deserted Island Diary manga begin the same way as they do in the Nintendo Switch game. Coroyuki, Benben, Himepoyo, and Guchan head to an island, expecting a vacation. They find it is deserted and that it is up to them to customize the place to their liking until it is home. However, since they are oblivious and childlike, this means there are over-the-top reactions and misinterpretations about handling things. So Coroyuki’s obliviousness, Himepoyo’s greed, and Guchan’s laziness can provoke different sorts of situations.

What follows is a lot of silliness! The kids are enthusiastic and wholeheartedly dive into things, often not in the “right” way. Tom Nook gets frustrated with them and the way they “don’t play properly.” This could involve some failed crafting ideas and concepts or construction projects gone terribly awry. (He decides to take over all future home building after seeing what happened with Dom’s home.) Even in-game activities and events are considered and “retold” throughout the comic. For example, we get to meet Wisp and see the new villagers handle his

The thing is, many of Tom Nook’s asides and the color commentary feel more like they’re geared to the older audience or parents also reading. Nook is easily overwhelmed by the kids and can be quite snarky. Raymond, who ended up becoming quite a star after the game launched and ruining the neighbor market, is a raging narcissist who wants Blathers’ museum dedicated to and focusing on him. Nook expresses shock at the mass deforestation that stems from the new residents trying to do everything in one day. We’re seeing things that actually happen in-game happening in the manga in their own way.

But while the focus of the Animal Crossing: New Horizons Deserted Island Diary is on the original characters, there are also nods to people’s favorite neighbors. The second half of the manga is dedicated to 4-koma short takes or even briefer strips. Some of the, follow these original villagers. But there are also two-panel comics focusing on certain neighbors. For example, Chester and Limberg are two of them. These probably won’t be “in character,” but they’re nods to other characters we’d see in the series and give the people a moment in a series that has hundreds of potential stars.

So yes, Animal Crossing: New Horizons Deserted Island Diary manga is geared toward a younger audience. There’s a distinct level of silliness here designed to amuse children. But it is definitely pulling ideas from the game of the same name. And while kids are the focus, some of the commentary and jokes are the sorts of things that will ring true no matter how old you are.