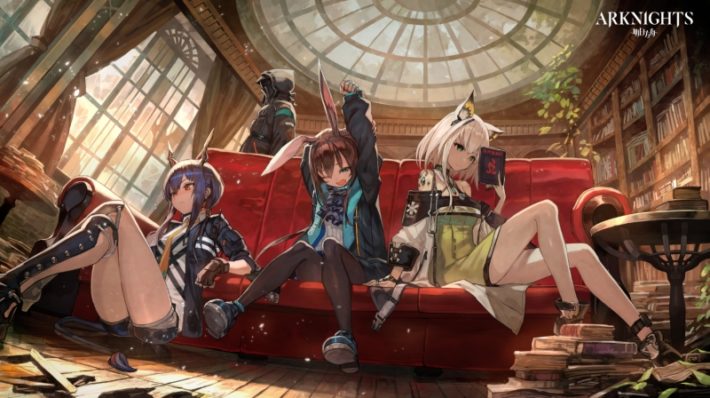 The Arknights 1st Anniversary Illustration Collection‘s main attraction is an 80 page glossy art book with illustrations commissioned from 72 artists, from those who’ve contributed character design and event art to the game proper to popular professional and amateur fan art. The art book cover also has a custom illustration of Operators Amiya, Ch’en, the player Doctor, and Kael’tsit. The image is also likely a lenticular printing, which will allow Amiya’s expression to change when the cover is viewed from different angles.

Also included is a postcard set featuring art of various Arknights Operators. Visible in the illustrations are Lungmen characters Ch’en, Hoshiguma, and Swire, the Rhodes Island Reserve Squad A06 (Midnight, Orchid, Spot, Catapult, and Popukar), and the Kjerag Operator Silverash, along with his pals Pramanix, Courier, Cliffheart, and Matterhorn. Fan favorite Angelina gets two postcard illustrations, and summer sniper Schwarz rounds out the collection.

Fans of larger sizes can also look forward to two Arknights PVC posters, both featuring the Doctor with his crew. Amiya, Kael’tsit, Ch’en, and Blaze show up on one, while the Doctor spends some quality time with Operator Click on another.

Other tokens are included in the box. Angelina and Eyjafjalla get a linked set of fridge magnets, and even the antagonist faction Reunion gets in on the action. Sarkaz mercenary W gets a key chain, while boss characters FrostNova and Patriot appear on a pair of coasters. The coasters can be stacked to form a single image.

The whole Arknights 1st Anniversary Illustration Collection is available for preorder starting January 8, 2021, with a targeted shipping date of March 20, 2021. Many countries in North America, Asia, and Europe are available for delivery, with some exceptions (sorry to those in Myanmar and Brunei). The going price is $68 USD before shipping. Yostar noted that the initial batch of items would number just 1500, though a second printing could occur for later in the year.

The Arknights 1st Anniversary Illustration Collection can be preordered from this site while supplies last. The game itself is immediately available on Android and iOS. Check out the special anime episode produced for Christmas Eve, or see our beginner’s guide if you’re just getting started.