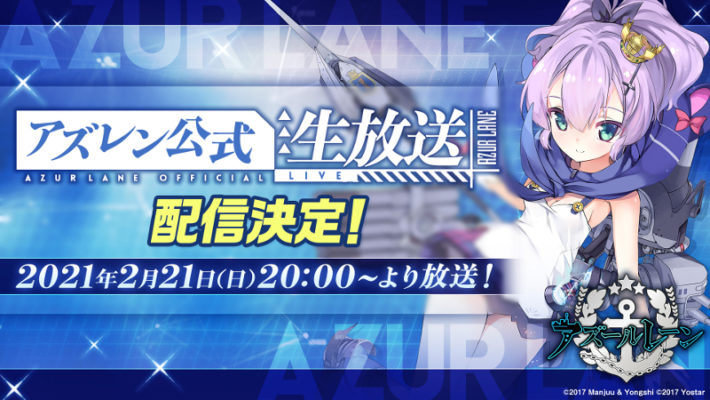 Yostar will hold a new Azur Lane announcement live stream on its Japanese YouTube channel on Sunday, February 21, 2021, at 20:00 JST (6 AM ET). As with all previous streams, this stream is expected to reveal a lot of new information, including a new major event coming to the game. [Thanks, Gamer!]

The Japanese official tweet barely gave any details about the stream other than its scheduled time. However, the press release sent to news outlets and the in-game news on the Japanese client confirmed that this stream will reveal a new event that adds even more shipgirls to the ever-expanding roster.

The previous major live stream for Azur Lane aired around Christmas 2020. It revealed the “Inverted Orthant” major event that was held around New Year 2021. The event added new shipgirls for the Germany-inspired Ironblood faction, such as the second Graf Zeppelin-class carrier named Peter Strasser and a P-class Panzerschiff cruiser originally named Prinz Heinrich by Yostar.

The popular Chinese-made mobile game is currently holding a Lunar New Year celebration event in all regions. The new shipgirls temporarily added with the event—ROC Chao Ho, Ying Swei, HMS Penelope, and KMS U-410—will be available until February 19, 2021. It will be months before they are made available again, either through a rerun or permanently.