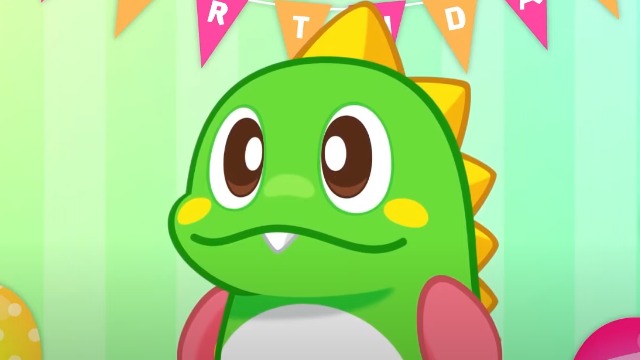 Taito revealed that for the 35th anniversary of the Bubble Bobble series, the mascot Bub will debut as a VTuber. It already uploaded a short introduction video to the official Bub’s Broadcast YouTube channel. The video showcases how the VTuber model for Bub will appear in future videos. Additionally, the video revealed the voice for the VTuber avatar.

While the debut of Bub as a VTuber is somewhat short, it promises a future video where the mascot will share details about past adventures with the audience. The mascot has primarily been featured as part of Bubble Bobble‘s branding as a franchise.

You can watch the debut video for the Bubble Bobble VTuber Bub below. English subtitles are available, if you turn on closed captions.

However, Taito isn’t the only company to turn a forward facing mascot into a VTuber. In June 2021, it was revealed that Sega had plans to turn Sonic the Hedgehog into a VTuber. Companies like Bandai Namco also partnered with VTubers to promote their products. Hololive’s Kiara Takanashi is the a Brand Ambassador for the upcoming RPG Tales of Arise. VTubers also appeared in franchises like the Disgaea series as party members. Players could recruit Disgaea incarnations of certain VTubers through the free DLC content.