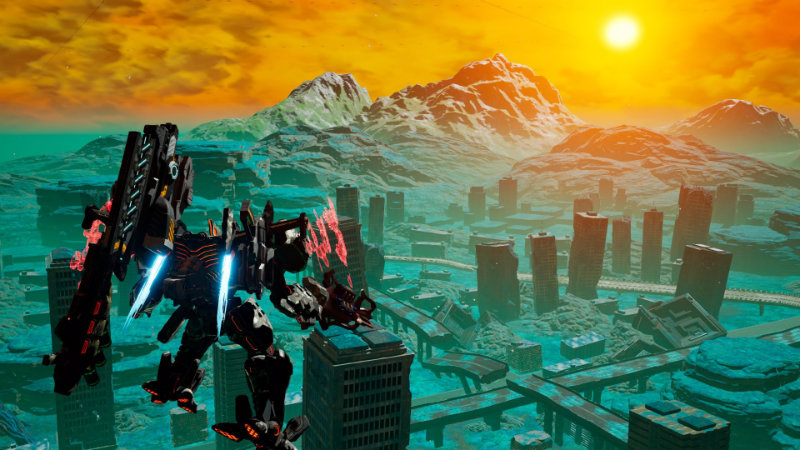 Daemon X Machina made the journey from the Nintendo Switch to the PC, and it’s pretty rad. My “PC” is a mid-tier “gaming laptop,” and I’ve got that bad boy on max settings. We aren’t here to talk version differences, though. I missed this one on Switch, minus some demo time. This XSEED-published PC port is my first real professional dive into Daemon X Machina, so all this Mecha Madness is washing over me in real time. I’m still uncovering the story (which has some wild ideas about corporations acting during an existential crisis), so for now I want to address the nuts and bolts, the gameplay, Daemon X Machina’s uh, Mechfeel.

It’s thoroughly dope, I tell you what.

I’m an old school Gundam dork, the kind that scoffs at where the series went in the 90s and aughts, but am totally down with Unicorn and Iron-Blooded Orphans. The Universal Century “Real Robot” vibe does a lot for me and informs most of my mecha tastes. That doesn’t mean I can’t get down with some Gunbuster or other “Super Robot” fare (shout outs to Mazinger), but I crawl away into my curmudgeon corner when a mecha work tries to do both at once. So I’ve never really gotten into shows like Evangelion or Code Geass. In games, you can find me passing on Zone of the Enders in favor of Dynasty Warriors Gundam, but that’s because Musou has poisoned my brain and I gladly let that happen.

Daemon X Machina is doing the Real/Super Robot genre hybrid thing, and the way that translates to the moment to moment action rules. It isn’t quite over the top, isn’t quite hardcore, and isn’t trying to convince me it’s smarter than it is. It’s a cool robot game with a striking color palette and an edgy sci-fi plot, but it’s about a band of roughnecks fighting against real life, systemic allegories. It offers a little bit of customization, but not the spreadsheet variety, and while combat has some hard limitations, it’s also fast and just responsive enough to just barely disqualify as “arcade-y.”

The best part is how it feels to move around in your mecha, aka Arsenal. Offense is fine, with a friendly helping of auto aim that makes an itchy trigger finger a viable strategy. But the defensive game feels great. It’s like a mix between one of those Gundam Extreme Versus joints, Ace Combat, and… a tiny hint of Gravity Rush? You’re beholden to limited ammo and a stamina bar, but enemies drop resources and stamina recharges generously.

You can’t just boost everywhere, but getting into a good position and easing off gets you soaring again fast. Enemies will buzz around you like frantic murderbees, and you have to take extra care when landing or taking off. It’s all those things with just enough leniency, just enough of a gentle hand to really make the controls feel like you’re piloting a machine, but one that can do impossible things.

I feel like mecha fans are some of the most under-served nerds in contemporary video games. Every now and then we get something cool, but the best stuff is traditionally not localized or released stateside, and the good stuff either is criminally ignored or compromised. Daemon X Machina is a light at the end of that particular tunnel, an original IP that looks good, plays well, and generally kicks ass at what it’s here to do. This is well-polished mecha action with a very specific kind of style and tone, and thanks to its slick mechanics I’m down to see it through to the end.

Daemon X Machina is currently available for the Nintendo Switch and the PC via Steam.