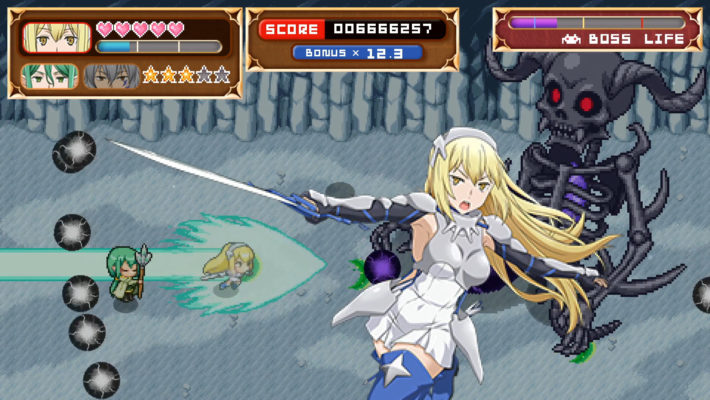 PQube and Mages decided to surprise everyone with a free game. However, it’s something familiar. In Japan, Is It Wrong to Try to Pick Up Girls in a Dungeon? Infinite Combate had a shoot’em up DLC pre-order bonus. Now, that is available everywhere on all platforms for free as Is It Wrong to Try to Shoot ’em Up Girls an a Dungeon?. In addition, it isn’t Danmachi Infinite Combate DLC anymore and is instead a standalone game.

As the title suggests, this former add-on is a single-player shoot’em up with one playable character, the Loki Familia’s Aiz Wallenstein. (She’s also one of the two playable characters in the original game.) After you choose one of four difficulty levels and go through a five-stage campaign in the Dungeon.

Aiz isn’t alone, however, as you can have two of five other Loki Familia members set as her supports. Bete Louga, Lefiya Viridis, Riveria Ljos Alf, and both Tiona and Tione Hiryute can all be unlocked. Each one has their own ability that might aid Aiz in her travels, For example, Bete has both a standard homing attack and flaming kick special attack.

Here’s a trailer showing what you can expect from the Danmachi Infinite Combate DLC turned standalone game.

Is It Wrong to Try to Shoot ’em Up Girls an a Dungeon? is out on the Nintendo Switch and PCs via Steam everywhere right now. You can also find it on the PlayStation 4 in North America, with its European counterpart debuting on November 27, 2020. Is It Wrong to Try to Pick Up Girls in a Dungeon? Infinite Combate is available for the Nintendo Switch, PlayStation 4, and PC worldwide.