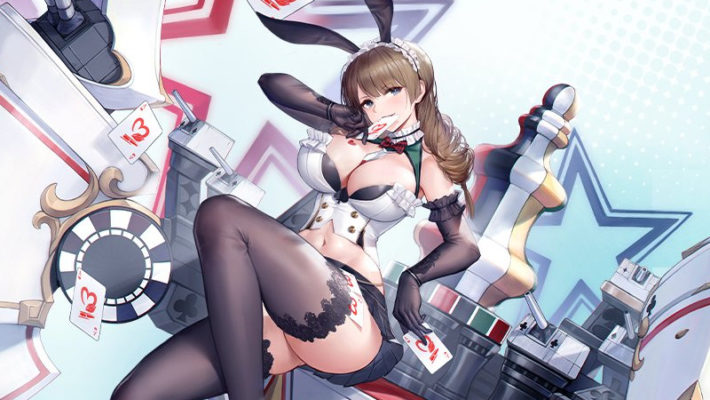 The Dead or Alive Xtreme: Venus Vacation collaboration event in Azur Lane will add the casino dealer Monica into the roster with a Light Cruiser rigging. She was not included in the anime teaser trailer published on November 19, 2020. That means the door is still open for even more characters to join the event roster until the full maintenance notes come up.

Monica is a new character originally created for the PC game Dead or Alive Xtreme: Venus Vacation. She was also added to the English version of the game very recently on November 18, 2020.

Light Cruisers in Azur Lane are generally considered to have well-balanced stats among the ship classes available in the Vanguard Fleet. They are also noted to excel in shooting down enemy aircraft. Misaki was also previously revealed to have the same Light Cruiser rigging, so you will be able to put both Monica and Misaki into the Vanguard Fleet together with Marie Rose.

Monica is preparing her maiden voyage and she will grace your dock in the near future, Commander.#AzurLane #Yostar #DOAXVV pic.twitter.com/sB5R4XASml

One of the characters who were shown in the teaser trailer is Nyotengu, who is now confirmed to receive an Aircraft Carrier rigging. This will allow her to launch various World War II-era aircraft, from A6M Zeroes to the TBF Avenger and F6F Hellcat.

Although Kasumi was also shown in the anime trailer, we still don’t know yet what her class will turn out to be. But regardless of that, it is already possible to form a full 6-ship fleet entirely comprised of Dead or Alive Xtreme characters with the currently known roster.

Nyotengu is preparing her maiden voyage and she will grace your dock in the near future, Commander.#AzurLane #Yostar #DOAXVV pic.twitter.com/6FuAF8FDhh

The mobile game Azur Lane, which is immediately available worldwide on Android and iOS devices, will begin its collaboration event with Dead or Alive Xtreme: Venus Vacation on November 26, 2020.