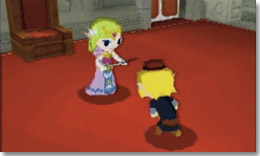 We already know that New Super Mario Bros. on Wii is going to include a demo play feature which will allow you to put the game on auto-pilot if you ever get stuck. Nikkei is now reporting that the feature will also be present in DS games.

The report comes by way of Andriasang.com, which says that Nintendo plans to use the feature mostly in “high-speed action games.” I guess Metroid: Other M is another possibility for Demo Play then?

What games on DS do you think would benefit from Demo Play? Personally, I’m surprised Nintendo and Square Enix aren’t making an effort to include it in Dragon Quest IX. Since that isn’t happening, I’m hedging my bets on The Legend of Zelda: Spirit Tracks.