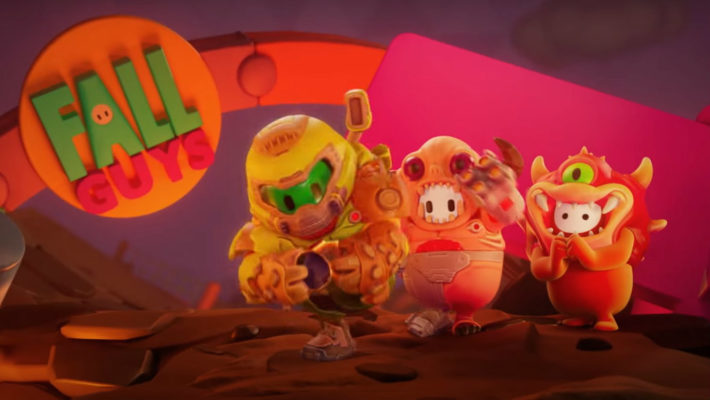 The Fall Guys: Ultimate Knockout DOOM collaboration details are here. While initially we only had a silhouette of DOOM Slayer to go by, the Doomguy won’t be the only outfit available. It turns out three designs will be able to be collected starting on January 12, 2021.

A video offered a look at all three, while also referencing DOOM games gone by. While the Doomguy costume was the one first teased and is the first that shows up here, our first clear look at new outfits involve the reveal of two demonic looks. Costumes inspired by the Cacodemon and Cyberdemon will both be available to get.

Here’s the full Fall Guys DOOM trailer. Make sure you have Crowns if you’re interested, as you’ll need to buy them from the in-game shop.

As a reminder, this is one of many crossover costumes created for the game. Lots of other iconic series have shown up too. There are Godzilla, Sonic the Hedgehog, and Team Fortress 2 costumes, for example. Even Yoko Taro said that he would like to see a costume inspired by NieR: Automata appear in the game for the characters.

Fall Guys: Ultimate Knockout is available on the PlayStation 4 and PC. The Fall Guys DOOM crossover will begin on January 12, 2021.