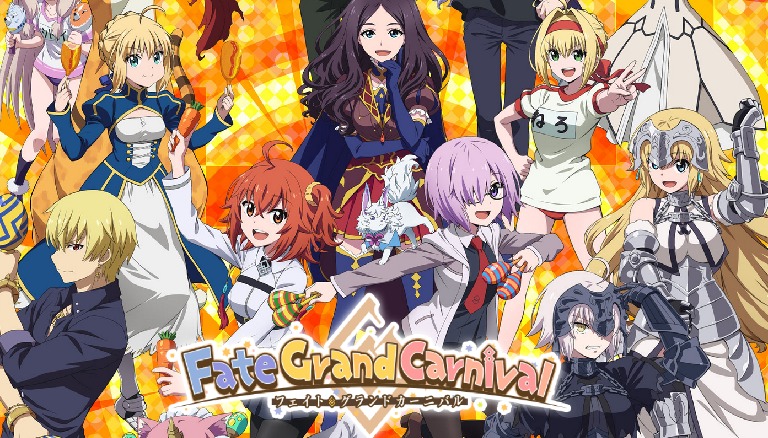 Aniplex has opened up an English North American website for Fate/Grand Carnival, advertising the different shorts that are in the Blu-Ray release. Though there are no news as of yet aside from its grand opening, the English Fate/Grand Carnival website will make it easier for people to keep up with releases.

The website has a few menus to look through. There is a character page that shows you a screenshot of the character, as well as their voice actor. You can also check out the cast and episodes that will appear. The first episode it introduces, with a short description and some screenshots, is “First Singularity Party: Olympia, the Spirit Limit Festival.” It focuses on Chaldea, in order to save energy, holding a sports festival to decide which Servants are allowed to stay and which will need to go.

The second episode is “Second Singularity Party: Kabukicho, a Singularity of Night.” Jeanne d’Arc Alter is short on QP, so she works as a hostess at CLUB M. Unfortunately, patrons and fellow hosts don’t make it easy for her.

In Japan, the first Blu-Ray and DVD for Fate/Grand Carnival are already available for purchase, as it launched on June 2, 2021. Aniplex will release the second season on August 25, 2021. Right now, there is no information about the timing or price.

Fate/Grand Order is readily available on mobile devices worldwide. The Japanese version’s sixth anniversary campaign, with a new Servant, GSSR banners, and a free SSR Servant of your picking, is live now. The global version of Fate/Grand Order is currently hosting the Las Vegas summer event in which Masters can obtain a free Saber Katsushika Hokusai.