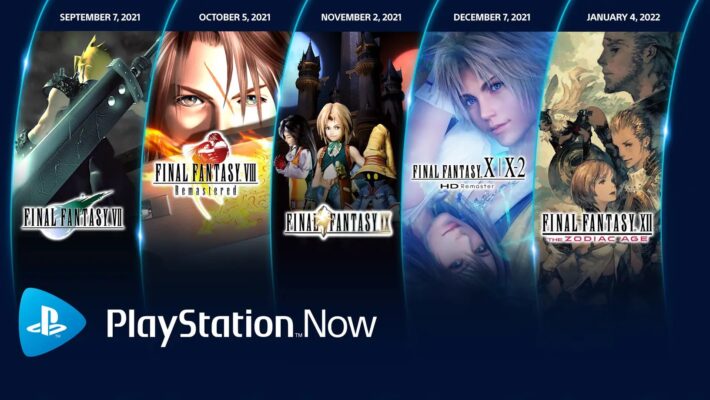 Recent Final Fantasy releases will have a new subscription service spot. Sony and Square Enix announced their new home. Starting on September 7, 2021, Final Fantasy games will appear on PlayStation Now, with FFVII as the first addition.

For the next five months, there will be one new (to PlayStation Now subscribers) entry in the Final Fantasy series available via the service. Things all kick off with the FFVII PlayStation Now debut on September 7, 2021. This is the original version of the game with a few quality of life additions. For example, you can speed up gameplay and turn off encounters. It is showing up one month after being removed from Xbox Game Pass.

After that, ensuing entries will appear in order. FFVIII Remastered will show up on October 5, 2021. On November 2, 2021, FFIX will appear. FFX | X-2 HD Remaster will give PlayStation Plus subscribers two Final Fantasy games to play starting on December 7, 2021. Finally, the last of the announced games is FFXII: The Zodiac Age, which will turn up on January 4, 2022.

As mentioned before, this comes after the Final Fantasy Xbox Game Pass exclusivity arrangement. In November 2019, Microsoft announced the partnership. Then, more entries appeared throughout 2020 and 2021. The most recent Xbox Game Pass addition in the series is FFXIII, which appeared on the service on September 2, 2021.