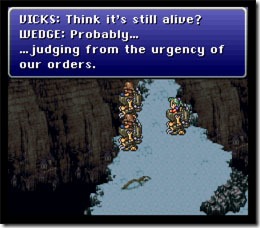 Speaking with Edge Online, Kitase explains that Final Fantasy VI was meant to be a game where every character had a leading role. Thus, a number of designers had input regarding the game’s large cast of characters, from series creator Hironobu Sakaguchi to Soraya Saga, who worked as a field graphic designer on the game, to Tetsuya Nomura.

Making multiple characters the “lead” and switching between their different stories came with its share of difficulties, however, Kitase recalls. “Maintaining a careful equilibrium between all the characters was probably the greatest challenge I faced,” he says.

“However, I ended up so involved with each personality while scripting the scenarios that there were points where, looking back at the game today, it’s clear that I somewhat lost this balance. For example, as the scenes featuring Celes and Kefka progress, these characters [while not actually playable] became far greater and more influential than originally intended when development began.”

Additionally, overcoming the technical limitations of the SNES proved to be another challenge, and while Final Fantasy VI launched on time and within its intended budget, a period of crunch was required toward the end of development. Most of these technical hurdles arose from managing memory, which had to be done manually, since the task couldn’t be entrusted to computers at the time.

“It’s maybe strange to say [this], but I miss the limitations of making games in those days,” Kitase admits. “The cartridge capacity was so much smaller, of course, and therefore the challenges were that much greater. But nowadays you can do almost anything in a game. It’s a paradox, but this can be more creatively limiting than having hard technical limitations to work within. There is a certain freedom to be found in working within strict boundaries, one clearly evident in Final Fantasy VI.”