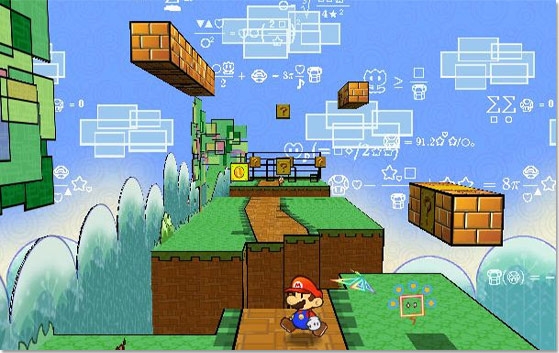 I think it’s safe to say none of us saw the 3DS coming. Back when we speculated upon what a potential DS successor could possibly do to set itself apart from the iPhone, the general consensus was that it would have something to do with digitally-distributed content, cheaper access to games, and ease of development both cost-wise and time-wise. Even following the announcement of the 3DS, I’m not sure we were entirely off.

While, if the 3D technology Nintendo are using works as advertised, will certainly be the 3DS’s defining feature, digital distribution is still very much an important part of the picture. A friend I was discussing the subject with after the announcement suggested that perhaps Nintendo were trying to keep up with Sony, who recently announced a push for 3D games on the PlayStation 3 by 2011. I’m not entirely sure I see it that way. Provided you’ve done your research, it’s apparent the 3D line of thought has been boiling and bubbling for a good many years now.

However, I do feel that the 3DS has the potential to undercut 3D efforts on the PlayStation 3. Here’s a couple things to consider:

Eventually, people will have certain expectations of a 3D game on consoles. While we’re all very susceptible to drooling over pretty visual feats, a “traditional” game made using 3D wouldn’t be acceptable once the initial novelty has worn off. Having a game “come alive,” so to speak, gives people reason to expect a certain unprecedented amount of freedom. Freedom is expensive to develop. It’s also expensive to buy. 3D TVs aren’t exactly affordable to the average joe just yet.

3D on a portable, on the other hand, is a fantastic way to ease yourself into that space. A built-in touchscreen interface and the allure of being able to put smaller games on a service like DSiWare is sure to make developers sit up and take notice. Even full-sized portable games are far cheaper to develop. A canvas for experimentation, as the iPhone and DS have both demonstrated, is often an alluring prospect. And as a developer in Gamasutra’s comments pointed out, the 3DS is resistant to an extent to emulation.

Meanwhile, while Sony have been quick to respond to the 3DS announcement in true corporate fashion, as consumers, we’re already starting to contemplate the important questions and size up the competition.

Most importantly, will the PSP2 make use of 3D? Considering Sony have prided themselves on being on the cutting edge of technology in recent years, there’s no reason to assume it won’t. This leads into the next question, which is, “Which portable platform is going to see the majority of retail support?” While the additional power under the 3DS’s hood might convince a few western developers to try their hand at producing great portable retail games, we have good reason to suspect the majority of handheld support will still come from Japan because, as one of our commenters said to me, “Where else will they go?”

They’ve spent years maturing the Japanese portable market; they aren’t going to drop the ball now. Depending on how different the two systems are, this could finally be a chance for developers to take a multiplatform approach to portable games…or they’ll end up having to choose again, which is never a pretty picture.

Almost at the end now. How many of these hypothetical awesome Japanese portable games will see an overseas release? Publishers have been getting increasingly selective in this regard, due to the cost of manufacturing cartridges — please address this, Nintendo — the increasingly niche state of JRPGs, and the piracy problem. One potential way to offset these issues could be to bring well-known brands that perform well in the west to the portable realm, which wasn’t entirely possible before.

And finally, how is DS3 going to be marketed to the expanded audience? Nintencats in 3D? At this point, it would be silly to assume that the system won’t come with some kind of built-in software to show off its features. Just like the last console that tried to do something new, the 3DS is going to need its own “hook” that gets people talking.

Ultimately, all we’re left with are more questions, which likely won’t really be answered until well into the system’s first year on the market when developers start to get past their “test” phase and figure out how to use it in ways that make sense.