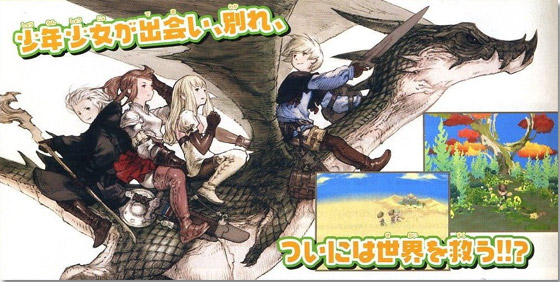 Ahh Jump, I knew we could count on either you or Famitsu to let the cat out of the bag before the teaser site. What fun is a countdown without leaks anyway?

Square Enix’s latest teaser is for Hikari no Yon Senshi: Final Fantasy Gaiden (Four Warriors of Light: Final Fantasy Gaiden), which goes back to a trademark we uncovered exactly a month ago. The game isn’t Romancing Saga IV or Seiken Densetsu or Crystal Chronicles, all of which were the subject of speculation last week.

Hikari no Yon Senshi is a standard turn-based RPG for the DS. You play as a 14-year-old protagonist who has to save a princess. Since you’re so big and strong, naturally this task is given to you by the King himself, whose daughter has been kidnapped by a witch.

The game seems to allow you to customize the equipment of your four-man party, and the changes are all reflected on the actual 3D models. The party consists of characters you meet along the way, so you’ll probably be able to choose between several different characters. No mention is made of whether or not you’ll be able to ride the chubby dragon featured on the teaser site.

IGN note that the battle screens are missing the MP meter, and instead feature a “Charge” command. Perhaps this allows you to charge up elemental attacks or limit breaks?

Character designs are by Akihiko Yoshida, who’s worked on character designs for the Ivalice game and the Final Fantasy III remake for DS. He’s also in charge of art direction for Final Fantasy XIV. Although, I can’t tell whether it’s the quality of the scans or the game itself, but those screens don’t look very good compared to Square’s other DS games… 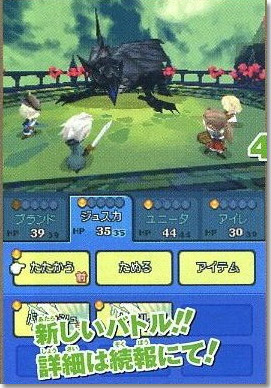 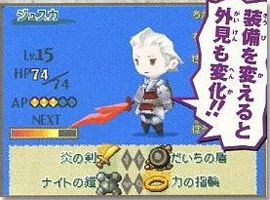 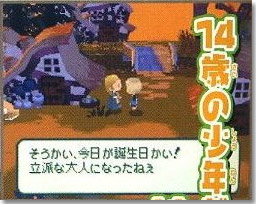