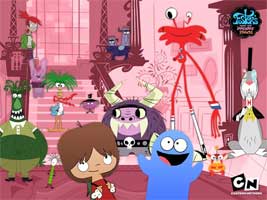 Two unannounced games popped up from Midway on EB Games’ pre-order list. The awkwardly titled Game Party is a Wii title with no details and it probably is not a remake of the NES game with the same name. Probably more interesting (because we at least have an idea about it) is a new Fosters Home for Imaginary Friends game on the Nintendo DS. The Foster’s license has potential to be something unique. Players could draw their own imaginary friends with the touch screen or Midway could design the game where you raise imaginary friends to get adopted. It’s equally likely the game is going to be developed as a derivative collect-a-thon platformer where Bloo jumps around the mansion.

Update: It looks like EBGames nixed the Fosters link from their database, but GoNintendo snapped up screenshots of both of the listings.