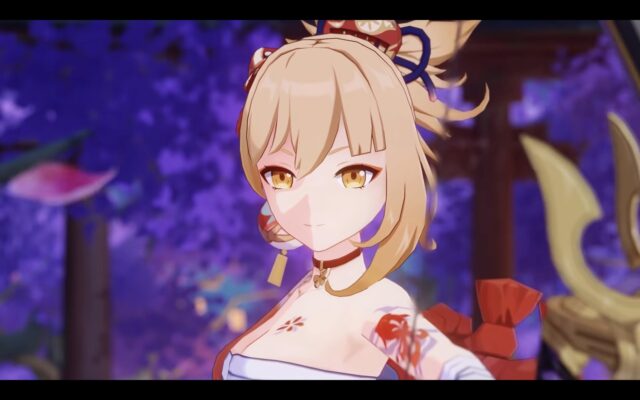 The Yoimiya banner is about to launch in Genshin Impact, and miHoYo shared a new Collected Miscellany video to show off the heroine before it appears. Like all entries in this series, Yuri “Dainsleif” Lowenthal goes over what she’s capable of doing in a fight. Essentially, it’s a look at Yoimiya gameplay, showing off her unique moveset.

After introducing Yoimiya as head of the Naganohara Fireworks shop and supplier of the nation’s artistic explosives, Dainsleif gets into gameplay. The look at the Yoimiya moveset begins with a peek at the Pyro archer’s Utility Passive. She’s the first character to make it possible to get some materials back while crafting furniture in the Serenitea Pot. Specifically, her Blazing Match talent applies to decoration, ornament, and landscape items.

From there, it looks at how Yoimiya behaves in battle. Her normal attack can chain into a five-hit combo. Her charged shot has two levels. One sends off a single flaming arrow to deal Pyro damage, while hitting the second charge level sends off up to three fiery arrows.

As one might expect from a Pyro archer and fireworks artisan, her Elemental Skill and Burst are explosive. Niwabi Fire-Dance, her Elemental Skill, involves her using a sparkler to temporarily make any arrow she fires inflict Pyro damage. Ryuukin Saxifrange, the Elemental Burst, triggers an actual fireworks show that, when she fires, causes Pyro damage to multiple enemies in the area. One enemy will also temporarily have Aurous Blaze, which will cause additional Pyro area of effect attack if someone who isn’t Yoimiya is swapped in to attack them. (In the trailer, Kazuha and Aether are used to show this effect in action.)

This is the second of the new Inazuma heroines’ Collected Miscellany trailers. The first one starred Ayaka, who appeared in the first 2.0 Genshin Impact banner. We’ll have to wait and see if Sayu, the new four-star, also gets one.

Genshin Impact is available for the PlayStation 4, PlayStation 5, PC, and mobile devices. It will also come to the Nintendo Switch. The Yoimiya banner will appear at 4pm PT/7pm ET on August 10, 2021. It will run until August 31, 2021.