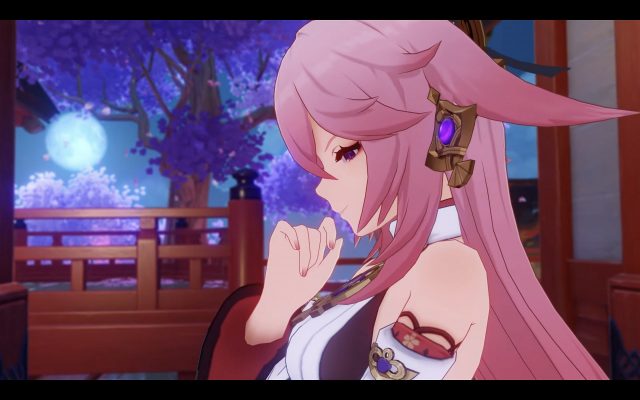 As part of the many announcements that came out of the July 9, 2021 version 2.0 broadcast, MiHoYo shared an extended Genshin Impact Inazuma trailer for The Immovable God and the Eternal Euthymia. The video covers elements of the new area’s story, shows off the Traveler’s new abilities, and introduces some of the new characters who could join our party.

Things start off with Kazuha introducing Inazuma to the Traveler. After a few shots of the different areas of the region, people get to see Aether gain Electro powers. We then watch him use some of his new abilities in a fight. While that happens, we hear about the Inazuma shogun (archon)’s Vision Hunt, which is confiscating people’s Visions.

From there, we get a look at the next playable characters. Upcoming version 2.0 banners will add the characters Ayaka, Yoimiya, and Sayu. All three of them are briefly shown in battle. After that, it looks at some other major characters in the latest story missions and the Inazuma archon.

Here’s the Genshin Impact The Immovable God and the Eternal Euthymia Inazuma trailer.

Genshin Impact is available for the PS4, PS5, PC, and mobile devices, and the Inazuma 2.0 update will arrive July 21, 2021. It will eventually come to the Nintendo Switch.