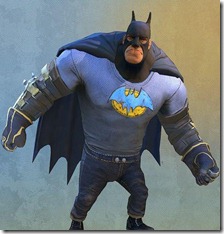 Set in a parody of the Batman universe, Gotham City Impostors is a 12-player squad-shooter where two gangs that admire Batman and the Joker are at war.

You can unlock and customize amusing-looking variants of Batman and Joker’s costumes to dress your character up in, and use weapons like gliders, spring boots and grappling guns. The game is developed by Monolith Productions, developers of the No One Lives Forever games.