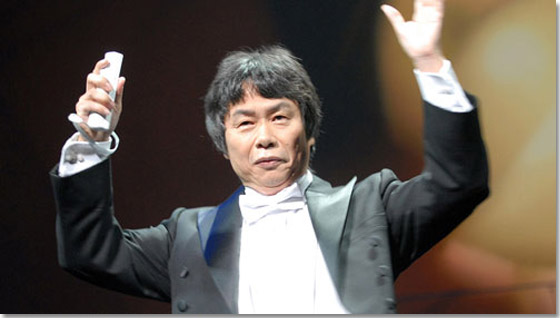 Easily the most interesting question posed in Nintendo’s financial results briefing Q&A for fiscal ’09 was about fostering young talent and whether or not the company was grooming a successor to follow in the footsteps of its famed managing director/designer/producer Shigeru Miyamoto.


It’s something that many of us have often pondered ourselves, being interested in the ways Nintendo works. What happens when Miyamoto retires? Will someone take his place? President Satoru Iwata sheds some light on the issue.


Certainly, when it comes to identifying and verbalizing some of the important major findings, few people can easily succeed him. For example, few people other than Shigeru Miyamoto can declare that weighing yourself everyday must be fun for everyone. However, the fact that Nintendo software is always full of unique and fun ideas attest to the fact that there are many good game creators at Nintendo. Together with Shigeru Miyamoto, all of them have been making what are called Nintendo software. So, I have never thought that we have not fostered game creators at the company.

Indeed, Iwata makes a good point. Keep in mind that games like Rhythm Heaven and Super Smash Bros. Brawl – both extremely different yet compelling experiences – did not involve Miyamoto in a leadership role.


Since Nintendo has grown so much over the past few years, and the main branch in Japan has grown increasingly outspoken, we’ve been lucky enough to get a glimpse into the company’s inner workings and their way of doing things. Names have been named, previously unheard of staff have been allowed their moment in the spotlight, and really, some of these people are quite fascinating.


I’ve taken the liberty of compiling a brief list below of Nintendo staff that we can probably expect good things from in the future. This list has been compiled using Wikipedia, the ever-informative “Iwata Asks” features, Mobygames and other online sources, and will hopefully shed some light on the other talent at the company.


1. Masahiro Sakurai:
Past: HAL Laboratory
Present: President of Sora Ltd., a second-party Nintendo developer.
Achievements: Kirby games, Smash Bros. series, Meteos (in collaboration with Tetsuya Mizuguchi). Currently working on something huge. Sakurai is very close to Iwata, and is often given the freedom to make games as per his wishes. He comes off as one of Nintendo’s most ambitious developers, given his insistence on including both adventure and online modes in Brawl, and packing the game with hundreds of unlockables.


2. Eiji Aonuma:
Past: Nintendo EAD
Present: Nintendo EAD
Achievements: Director for every Zelda game starting with Ocarina of Time upto Twilight Princess. Aonuma has stated that he won’t be giving up on the Zelda series until he can make a game that surpasses Ocarina, so if you want your epic/dark/grown-up Zelda, this is the guy to root for. No one is more familiar with the series than him at this point. I just wish he’d realize that Majora’s Mask already surpassed Ocarina long ago. Still, when Aonuma-san himself hints that the Zelda franchise is going to undergo an overhaul, you’d better pay attention.


3. Yoshiaki Koizumi:
Past: Nintendo EAD
Present: EAD Tokyo
Achievements: Director of Super Mario Galaxy and the Mario 128 tech demo, Koizumi’s involvement is what finally led to the presence of an orchestral soundtrack in Galaxy. He has worked closely under Miyamoto’s guidance, often acting as the middleman between him and the rest of the development team. You can also thank him for the excellent camera in SMG, without which the game wouldn’t have been nearly as enjoyable.


4. Kazuyoshi Osawa:
Past: Intelligent Systems
Present: Software Planning & Development Achievements: While credited for game design on WarioWare Touched! and WarioWare Twisted!, Osawa’s greatest achievement is probably masterminding the Rhythm series. He has gained a reputation for being a perfectionist among his teammates, and if Rhythm Heaven is any indicator, he doesn’t give up until he gets it just right. I’m personally very interested in seeing what he does next.


5. Yusuke Akifusa:
Past: ???
Present: Nintendo EAD
Achievements: Over the past two years, Nintendo has successfully made the transition from “videogame publisher” to “entertainment software publisher.” The company is very unique in that it is quite unlike any other organization from either the games or software industries. One of the reasons it has been able to make this transition is due to people like Yusuke Akifusa, designer of DSi Sound, the DSi’s music player/editor. During a period when time was of the essence and the DSi’s feature-set was being locked down, Akifusa-san proactively performed his own personal research and pushed for the DSi to include a competent sound editor, which he sees as the device’s “second supporting pillar.” Bottom line, when someone finally puts the microphone and music player to good use, this is the man you can thank for it.


6. Tetsuya Takahashi & Soraya Saga:
Past: Squaresoft
Present: Monolith Soft
Achievements: Fans of the Xenosaga games should be familiar with this co-authoring couple. Takahashi and Saga are the minds behind the complicated events of Xenogears/Xenosaga. Takahashi – who heads up Monolith – has quite the resume, having worked on everything from Final Fantasy to Chrono Trigger, while wife Soraya Saga is no slouch either, credited for part of FFVI’s script and for map design for the same. Now that Monolith Soft is a second-party Nintendo developer, both have already started lending their talent to the company’s line-up of games, starting with Soma Bringer, which is still the best RPG on DS so far in my humble opinion.


The second half of Iwata’s answer is even more interesting. He talks about passing on experience to the younger generation:

On the other hand, I know that people like Shigeru Miyamoto and I have lived in very fortunate times. Specifically, we were able to experience video game development as forerunners in this industry when we were young. It is one of the big themes for us to think about how we can transfer what we have learned to the younger generation who will never have the same experiences. We have been tackling with this mission in a variety of different ways, but I’d like to talk about them only when we can come up with some concrete result and when we will be able to tell you this developer or that, who has been trained through this way, has made such a software.

It’s a notion I think many of us will agree with. I know I personally feel like newer games aren’t as immersing as older ones and have a tougher time holding my attention or drawing me into their world.