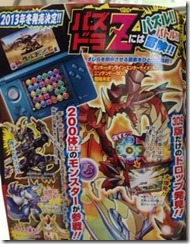 For the uninitiated, Puzzle & Dragons is a social puzzle game developed by GungHo Online Entertainment, and is one of Japan’s most popular social games, with over 12 million registered players in the country to date. The game has played a large role in GungHo’s success.

The 3DS version will feature over 200 monsters to collect, and is slated for release this Winter in Japan. A price has not yet been announced.