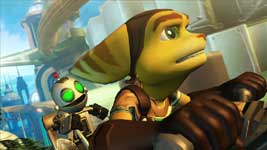 The E3 demo for Ratchet & Clank Future: Tools of Destruction was based on the trailer Sony showed at their Gamers Day back in May. Like the other games in the series you play as Ratchet and Clank, his tiny robotic sidekick, is strapped to his back. Metropolis is under siege and the goal in the demo level is to escape. You can use a standard laser gun or Ratchet’s trusty wrench to hit aliens if they get too close. New weapons in the build include the Groovitron, a musical bomb that makes aliens boogie in place. Once they’re mesmerized to the 70’s music Ratchet can run up and smack them with his wrench. The Groovitron is useful when Ratchet is surrounded since it has a long range and it keeps enemies at bay for a few seconds. The other semi-new weapon is a transforming ray. Yeah, every Ratchet game has a morphing ray, but this changes enemies into penguins. Semi-new right?

Semi-new is the feeling I got when I played Ratchet & Clank Future: Tools of Destruction. It is more of the same, on a grander scale, with better graphics and humor that was absent in Ratchet: Deadlocked. But maybe that’s not a bad thing. The vibrant city that Ratchet walks around in has ships zooming past him in the background and buildings falling to the ground. It’s great eye candy. There is so much going on that you want to look at the scenery when you should be paying attention to Ratchet grinding on a rail. Occasionally, parts of broken buildings will destroy the rails and Ratchet has to jump avoid falling into a pit. 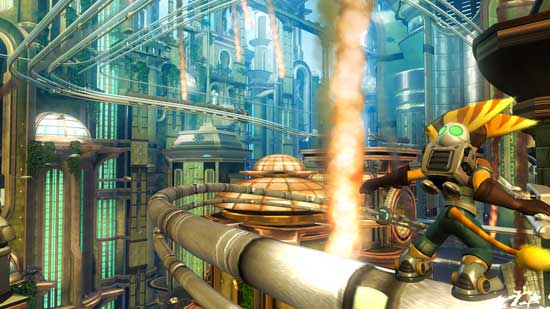 Near the end of the level there is a grind rail scene leading up to the boss fight. There are three rails Ratchet can grind on and you have to jump between them to avoid getting hit by trains. After the trains a giant space ship comes behind Ratchet and starts firing lasers in simple patterns. First it shoots a blue beam on the left and right rails, forcing Ratchet into the center. Then the spaceship shoots a beam in the middle. Basic stuff we’ve seen before that led up to a freefall sequence where you guide Ratchet’s gliding with tilt control. The tilt control felt a little wonky and forced. It would have been much easier to use the analog stick to guide Ratchet in the air, but some part of the demo had to utilize the SIXAXIS controller. 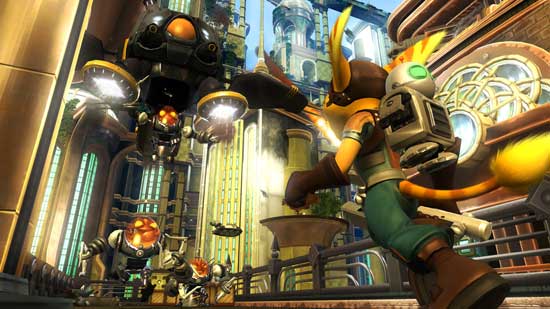