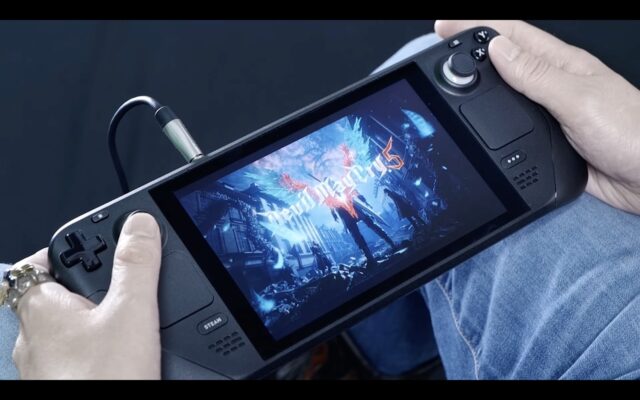 When the Valve’s Steam Deck launches, it will be able to play a number of games from people’s Steam libraries anywhere. To help provide a better idea of how some may look, Capcom showed up with a video. It released a new trailer for an old game. Essentially, it spends about a minute showing how Devil May Cry 5 will look running on a Steam Deck.

This isn’t one continuous bit of footage. Also, it offers an over-the-shoulder perspective, so someone can see the Steam Deck while Devil May Cry 5 is running on it. Things kick off with a look at the title screen. Then, clips starring certain characters while they face particular challenges appear. For example, things begin with Nero fighting Goliath. After that, it cuts to Dante fighting some general enemies. V’s footage is shown off once that’s done. During his segment, we can see him summon and fight alongside Griffon and Nightmare. Finally, there’s a look at what Vergil can do.

People will have to wait a bit longer to see it in person. The Steam Deck was supposed to debut in December 2021. However, material shortages and global supply chain issues got in the way.

Devil May Cry 5 is available on the PlayStation 4, PlayStation 5, Xbox One, Xbox Series X, and PC. The Steam Deck will begin shipping in February 2022.