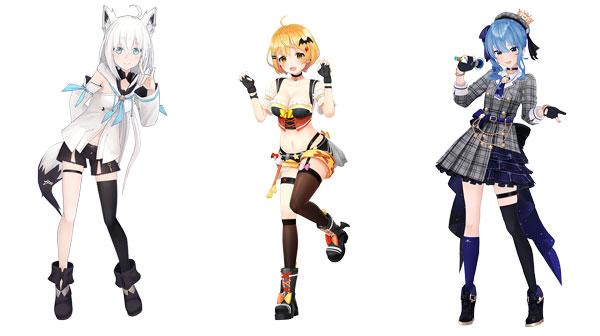 Almost a year ago, Bandai Namco released Tales of Crestoria on mobile devices worldwide, and to commemorate the game’s first anniversary, Hololive VTubers will stream the game. The three VTubers are Shirakami Fubuki, Yozora Mel, and Hoshimachi Suisei. They will stream together from Fubuki’s channel. [Thanks, Dengeki Online!]

Aside from the Hololive stream, Bandai Namco also opened up a first anniversary website for Tales of Crestoria. Currently, there is a Twitter campaign in which players can vote on if an RPG protagonist’s behavior is “sinful.” For example, is it a crime to randomly enter an NPC’s house and steal their stuff? You can vote on it, and Tweet your opinion. Once there are a total of 10,000 Tweets, Bandai Namco will offer a maximum of 200 summons in-game. More events will be added in the near future.

Though Bandai Namco has released many Tales of mobile games, Tales of Crestoria is the first one to really have its own unique story. The previous games heavily featured characters from past Tales of titles, whereas in Crestoria, they are major characters at most. Tales of Crestoria focuses on its own story and original characters, rather than simply on how the protagonist interacts with familiar faces.

The Hololive stream of Tales of Crestoria will start on July 15, 2021 at 9:00 PM JST on Fubuki’s channel. Aside from Fubuki, Suisei and Mel will appear as well. Tales of Crestoria is readily available on mobile devices worldwide.