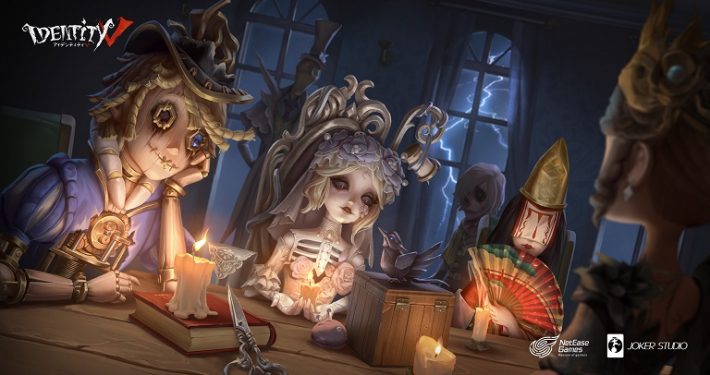 It is the third anniversary of NetEase’s asymmetrical horror game Identity V, and there are numerous events ongoing in the manor to celebrate. Not only is Naiad now available for purchase with puzzle pieces or echoes, but there are also new skins for existing characters such as Gardener and Ripper. Additionally, all of the characters are temporarily free to use outside of rank matches.

For the third anniversary, Identity V is running the Stormy Night Surprise event. Completing the event will allow players to earn goodies such as cards to unlock costumes or emotes. Other rewards include a limited-time accessory, portrait frame, and portrait. The Stormy Night Surprise event puts the player in the shoes of Mr. Inference, and he has to solve mysteries by collecting clues. You earn Investigative Actions by playing quick or rank matches. Every 5,000 Deduction Points gives one Investigative Action, and it accumulates so long as you earn over 2,000 Deduction Points at the end of a match.

Currently, the only new costume in the store is Ripper’s “Good Child” skin. It is part of the ONCE series, which shows off past versions of the character.

Watch the incredible ONCE Series Jack the Ripper in action! Don't let him catch you!!????#IdentityV #ONCE #Ripper pic.twitter.com/mHQVkWQRiR

In addition, for a limited time, Acrobat’s Ace costume is back in the shop until July 21, 2021. There is also an upcoming skin and accessory for Gardener that will appear in the shop from July 8.

The third anniversary event in Identity V will run until July 22, 2021. This is only part one of the benefits, and the official Identity V Twitter account will post more details in the future. Identity V is readily available on mobile devices and Windows PC.