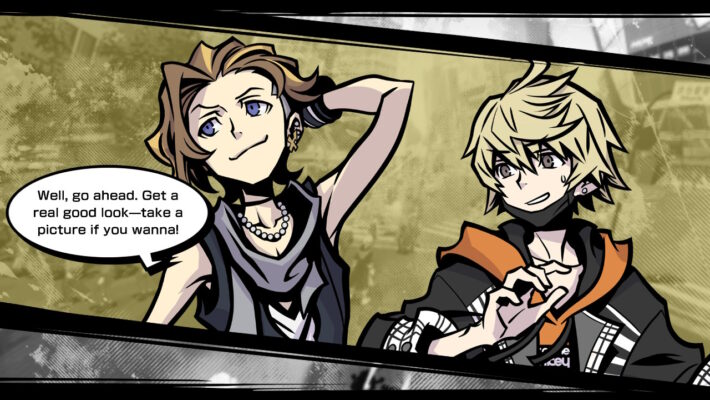 NEO The World Ends with You is the sort of game people waited years to play. And part of that comes down to its unique designs and modern setting. To help get a better feel for the NEO TWEWY characters like Rindo, Fret, Minamimoto, and Nagi, Siliconera spoke with Character Designers Gen Kobayashi and Miki Yamashita about creating the cast.

Jenni Lada, Siliconera: Of the new cast members of NEO The World Ends with You, who did you design first?
Gen Kobayashi: Fret was the character I designed first. He has the important role as the friend of our main character, Rindo, and designing him was not the easiest. Truth be told, Rindo’s design wasn’t finalized when I started designing Fret, and that was one of the factors that made the design work challenging.

Miki Yamashita: The first new character I designed was Kaie. I chose him because I felt his somewhat shadowy nature matches myself in a way. Through the guidance provided by Mr. Kobayashi and Mr. Tetsuya Nomura, I was able to complete the design.

Which one of the NEO TWEWY characters was the easiest to pull together and determine their style?
Kobayashi: I would say Shiba, the leader of the Shinjuku Reapers. Prior to beginning the design work, I discussed the details with Mr. Nomura, through which his vision for the character became very clear. That made the design process fairly easy overall.

Yamashita: Fuya took the least amount of time. I feel his traits matched well with my own otaku nature, which is why there weren’t many changes from the initial draft. 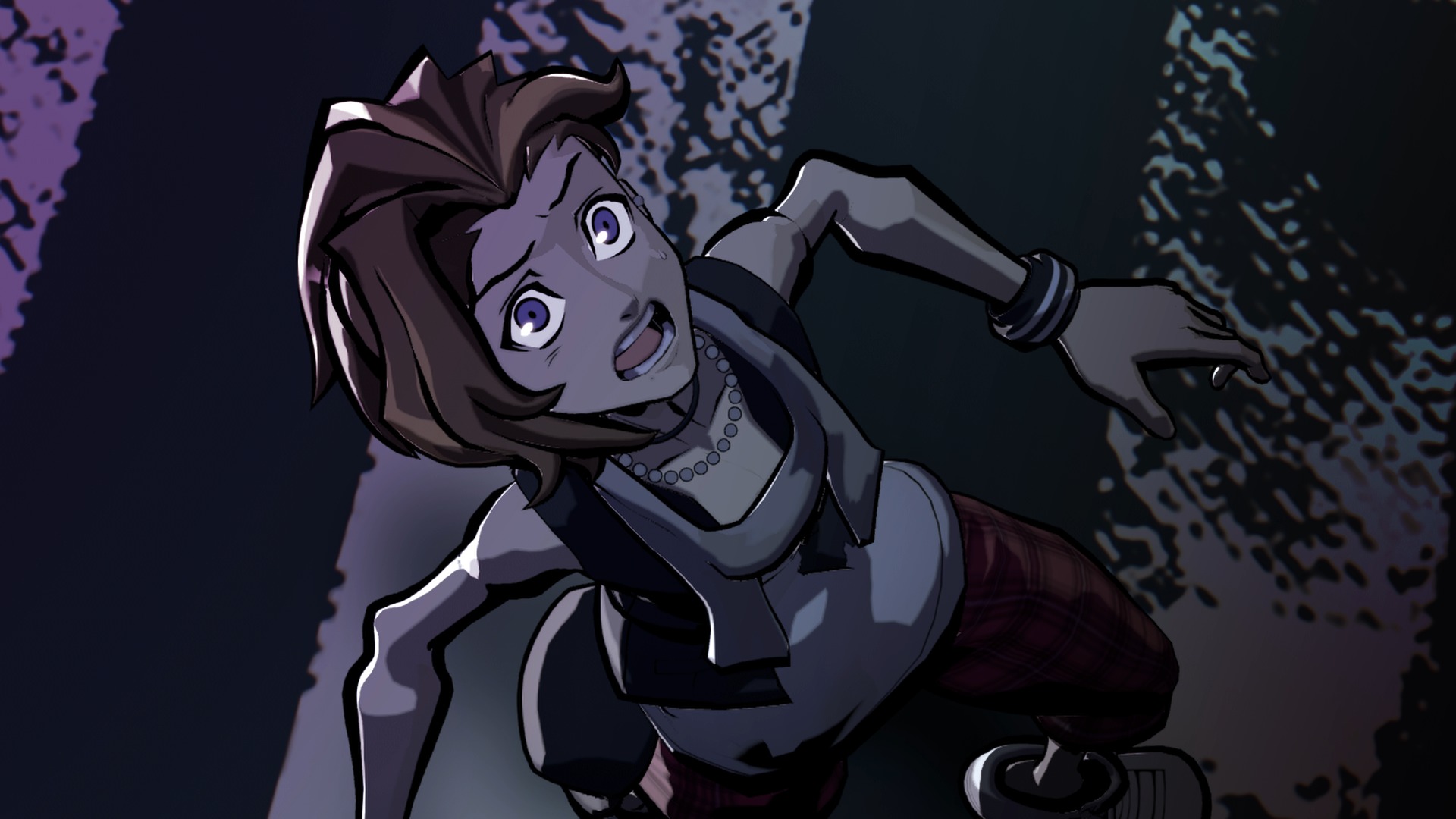 Did any of the NEO TWEWY characters give you any trouble when it came to pinning down their appearance? How many iterations did they go through before you landed on their final design?
Kobayashi: It was Fret, the character I designed first. Including minor edits, I believe it went through a dozen or so iterations.

Yamashita: That would be Minamimoto. I had difficulty creating a design that matched his characteristics and also fit into the world lore. I just went back and counted, and I went through a whopping 15 iterations…

Ultimately, Mr. Nomura was able to provide some key points in the design direction: wearing a hooded top, with a crocodile-pattern long coat, and cropped pants. With that in mind, I was able to finalize the design.

Nagi’s got a very distinctive look, what with her ita bag and style. How did you work to incorporate her love of her fandom throughout her style?
Yamashita: I had initially proposed a more subdued look for Nagi, but in the initial character concept, we framed her as an otaku whose love for her favorite character (Tomonami) is completely over the top. We first cemented the concept of that character, after which I proposed the idea of the ita bag. We ultimately decided to add the bag into the design, and that helped to bring even more of her otaku nature to the forefront in the design. 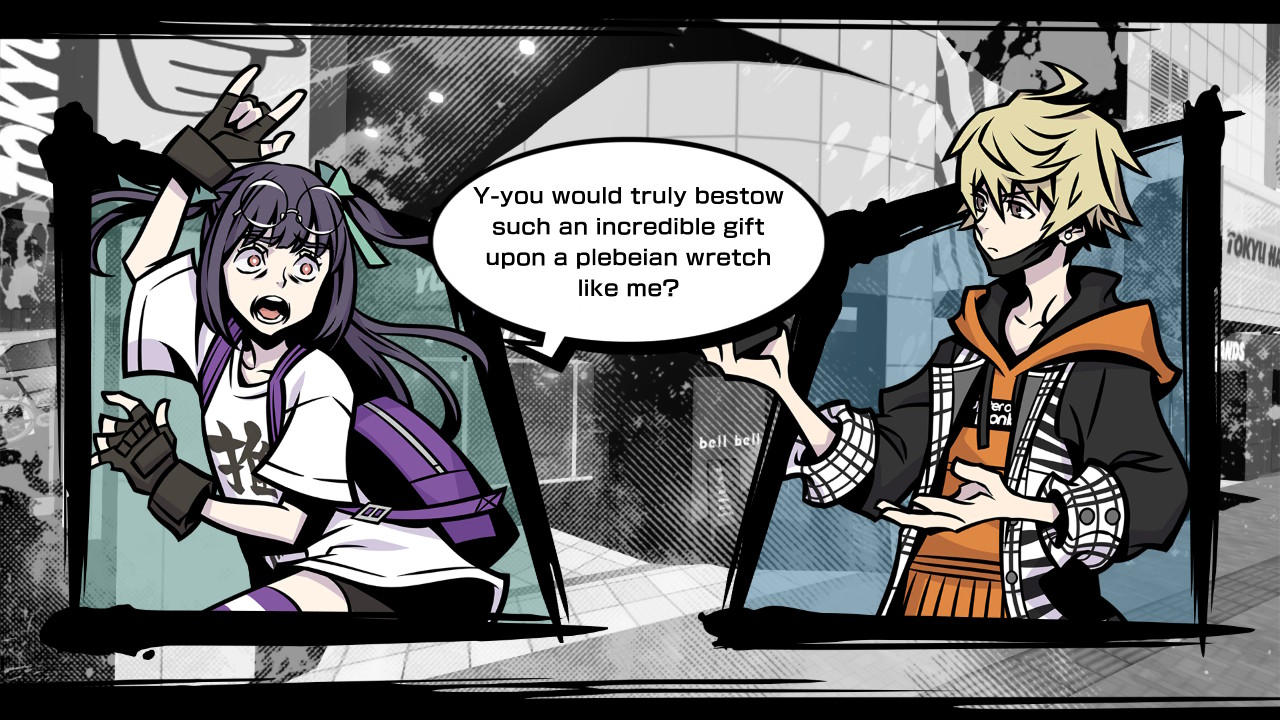 Did any of the designs of past TWEWY characters, like Neku and Shiki, influence the NEO TWEWY cast members? If so, how?
Kobayashi: In the original The World Ends with You, character design received a lot of attention along with the world lore and music, so I referenced the original a lot when designing the new characters. I especially referenced the original in terms of how to bring out each of the characters’ personalities as well as their personal fashion, while at the same time adding in elements of modern-day Shibuya fashion to create the designs.

Yamashita: I was mindful of certain things from past character designs, such as the overall direction taken for color schemes and line definition in the art.

Minamimoto is an incredibly recognizable character and was a fan favorite in the original TWEWY. His look changed quite a bit in NEO TWEWY. What was the thought process for his look? What real-world styles inspired his designs?
Yamashita: Minamimoto was actually the character I started work on first. There was quite a bit of trial and error since I wasn’t used to overall design process. At first, I proposed designs with Shibuya’s young crowd as the inspiration, but after aligning with Mr. Nomura, we ended up with a design that wasn’t drastically different from that of the Minamimoto from the first game. 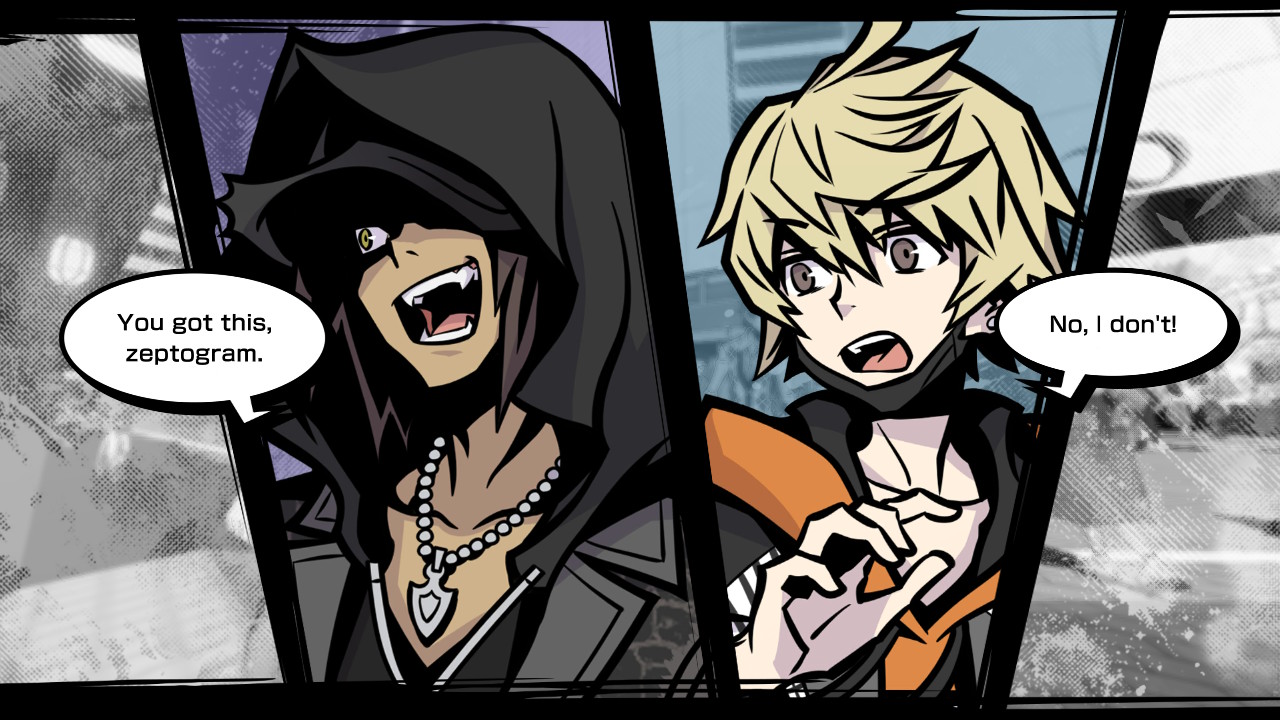 Coco has quite a different look between TWEWY and NEO TWEWY. She goes from neon to a more earthy look. What led to that change? How does it reflect her character growth and your thoughts on the character?
Yamashita: The request I got for Coco’s design was to go with a completely new look. As the “Harajuku style” from the original isn’t “in” anymore, the assumption was that she would have a new style now—this led me to go with a natural, but girly approach that felt more current with the times. As the original design went all in with the Harajuku style, I also took that same approach for her updated design. I think you can see that through her “princess-like” style.

Multiple NPC characters return in NEO TWEWY. How did you handle their appearances this time around? For example, how did you decide to change and evolve Ken Doi and Eiji Oji’s looks?
Kobayashi: With the three years that have passed, Doi Ken has a new career in this entry, and with it his attire has also changed. When it comes to characters who appeared in the original game, we’ve incorporated some sort of elements like this that makes you feel that time has passed.

Yamashita: For Eiji Oji, I assumed that he would have become even more “prince-like” after three years, so I tried to make his fashion a bit more subdued and sexy.

NEO The World Ends with You is available for the Nintendo Switch and PlayStation 4. It will also come to PCs via Epic Games Store in Summer 2021.