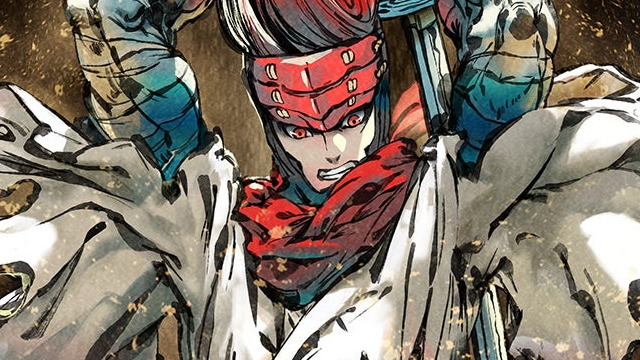 World of Demons is the latest dynamic, action title by PlatinumGames. This unique action-oriented title implements gorgeous ukiyo-e inspired visuals and blends them with deliberate, powerful actions to create an entirely new experience for mobile devices. Siliconera recently had the opportunity to sit down with PlatinumGames’ Ryoya Sakabe and Koji Tanaka to pick their brain about what went into designing World of Demons and maintaining that stylish and slick action the studio is largely known for.

Ryoya Sakabe, PlatinumGames: So I think that one of the things that we wanted to focus on when creating this game is that we’re a studio that is known for a fast-paced, satisfying, high-tempo kind of action. If you tried to just throw all of these sometimes complex controls that can go with that into more of a mobile UI screen you can get a very busy screen. You can lose a lot of that space and get confused very quickly.

So I think that one of the things we really wanted to focus on with this is “How can we create really satisfying controls with really simple, reflex intuitive actions from the user?” with just a few buttons on the screen. Something that doesn’t clog the screen space up too much. Other than that, it was really just finding something that fits with trying to nail the ancient Japanese traditional style of the game. We wanted to go with something not quite as fast paced as Bayonetta, something that I felt had a little more weight to your action with each move feeling a little more pronounced. That’s what we were looking at when wanting to design the game.

Do you find that the touch controls added anything special to the combat?

Sakabe: So this might kind of overlap with what we were saying in the last question, but if you take your typical console controller when you’re building an action game you’re trying to think about how you can divy out the controls across ten buttons or so. You don’t have the same kind of design space with something like a mobile phone. We were really trying to think about how we can get as much variation as possible for the main character, Onimaru, with how many attacks and what kind of variation we can get out of one button.

We wanted to see how we could simplify the controls, and how to do as much as possible without taking up too much screen space. I think another thing regarding the camera, again, if you were to take a controller you’d have the left stick to look around. But, when you’re working with a mobile game we found that just having your thumbs on the screen means that it was a bit busy already with just attacking, dodging, and using Yokai summons. So we had to simplify the camera controls a bit. You can slide the camera a bit, and the camera will lock onto enemies when you’re in combat. These are the ways we would try to find to solve the puzzle for the player, essentially, to effectively utilize the camera controls for them.

What thoughts go into making the actions and attacks exciting using this visual style? In making motion and impact feel good for the player and keep them coming back for more?

Sakabe: We really wanted the action to feel pronounced, especially with the attacks, and we wanted to get the timing right. Getting the action right is something that we always have to do with our games, but trying to get that right for this game while using the samurai [Onimaru] while fighting enemies and trying to figure out the weight between the attacks. This was something that we were working with. As for replayability in World of Demons, for players that are a little more advanced we tried to throw in some things to keep the action interesting. You can tap the buttons to attack, but tapping in certain sequences allows for different attacks between the characters. You’ve got Sayo, who might do a few quick thrusts, and Dozen, who is a character that appears later, might do a hammer attack. There are a lot of combinations that you can play with there. The same goes with the Yokai summons that you have in the game. I think something that’s really interesting about this game is figuring out what combinations you want to use in what order, so you can mix things up there and create variety in your gameplay.

World of Demons samples from a wealth of Japanese folklore, specifically the Hyakki Yagyo (Night Parade of One Hundred Demons) in this instance. Is there a reason you decided to create another game set during the Kojiki Period?

Koji Tanaka, PlatinumGames: Inside the company there was interest in putting a few different elements of a game together. We had a lot of interest in doing something with ukiyo-e, the woodblock style print artstyle that you find in more traditional Japanese art. We wanted to do something with samurai and Yokai, and wanted to mix this together. There was someone internally that had the idea about how to put this together, which is how World of Demons came to be.

We think that Japanese culture continues to be popular globally. You can see Yokai influence in a lot of places, more and more. It’s still rare to see a more faithful rendition of what we’re talking about here with the Hyakki Yagyo, more of a depiction of that era of Japanese art that you don’t see as much in modern works that carry that influence. We were interested in bringing that in a way that audiences may not have seen before in relation to the original artworks of these Yokai. It was a fun challenge for us to make a 3D model for some of these Yokai and how they came to life in the game.

Are there currently any plans for future content to be added to World of Demons? Such as a continuation of the storyline, or the addition of more game modes and yokai?

Tanaka: We don’t have any concrete plans at the moment. However, with what we have created so far we have imagined a continuation of the story and would love to have the opportunity to pursue that someday. We’ll just have to wait and see.

Is there any plan to release World of Demons on other platforms?

Tanaka: Simply put, No. We do not have any plans to release World of Demons on any other platforms.

World of Demons is immediately available for iOS devices through the Apple Arcade service.