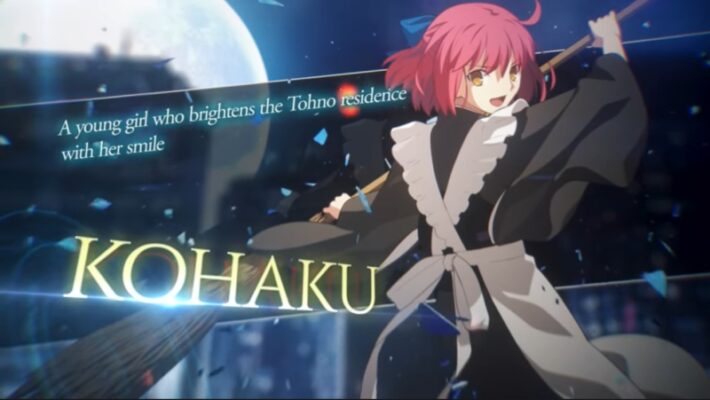 As Melty Blood: Type Lumina approaches release, Type-Moon Games has opted to emphasize service with a smile by debuting a new battle preview trailer for Kohaku, the older of the Tohno household’s twin maids.

The battle preview shows Kohaku, the ever-smiling maid, renewing her reputation as one of the most revered fighters in the Melty Blood roster. Described as a trickster-type character, Kohaku has a wealth of traps that she uses to pressure opponents and drag them into unbreakable chains. These traps include a cactus that throws punches, a flower that shoots fireballs across the screen, and a broom-riding aerial that drops bombs along the path. She also has a jumping move that deposits a massive weight in her foe’s lap, and an Arc Drive special that changes her into a qipao to unleash martial arts fury.

Besides Melty Blood: Type Lumina, Kohaku also appears in Tsukihime and its remake, A Piece of Blue Glass Moon. She’ll be voiced by the same actress as in the remake, Yuuki Kawahara. Kawahara also voices Tohru from Miss Kobayashi’s Dragon Maid and Shigure from Azur Lane.

In contrast with her younger sister Hisui, who wears western-style maid attire, Kohaku wears a Japanese-style maid outfit, with an apron accenting her kimono. Also unlike Hisui, Kohaku always has a smile on her face, and is cheery and playful. The attitude is a facade, though, put up to disguise deep trauma suffered in childhood.

Melty Blood: Type Lumina releases for the Nintendo Switch, PlayStation 4, Xbox One, and PC via Steam on September 30, 2021.