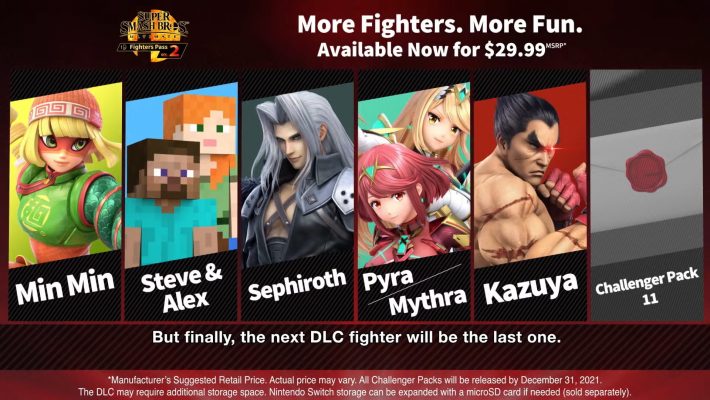 While the June 28, 2021 Super Smash Bros Ultimate presentation offered details about Kazuya, it also hinted at the future. Namely, it offered a few details about the last SSBU DLC character. Challenger Pack 11 will be announced in 2021 and it will mark the end. Director Masahiro Sakurai also commented on the longevity of Super Smash Bros. for Wii U and 3DS leading into SSBU.

Up until now, we’ve created all sorts of fighters and stages. Gathering all of these games, new and old, and compiling them into a single product is a task that has meant a lot to me. Now that I think about it, it’s been close to 10 years since Super Smash Bros. for the Wii U and Nintendo 3DS systems was in development. I’ve been working on this for a long time. You could call it my life’s work. But finally, the next DLC fighter will be the last one. There won’t be any more after that. It’ll be a while before that announcement, but it’ll be available this year as planned.

Here’s the full SSBU Mr. Sakurai Presents Kazuya presentation. The talk about the last SSBU DLC comes up starting at the 1:09 mark.

Super Smash Bros Ultimate is available for the Nintendo Switch. Tekken’s Kazuya will appear on June 29, 2021. Challenger Pack 11 will be the last SSBU DLC character.