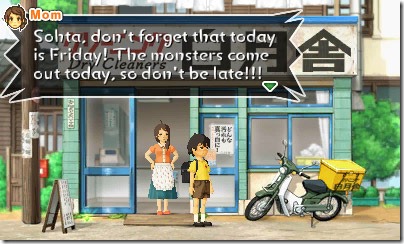 The highlight of this week’s Nintendo eShop update on 3DS is Attack of the Friday Monsters! A Tokyo Tale. This is one of the three games included in Level 5’s Guild 02 compilation, and is designed by Kaz Ayabe, the creator of My Summer Vacation.

You play as Sohta, a young boy living in a town where monsters surface to battle each other every Friday. Sohta is new to town and takes it upon himself to solve the town’s mysteries by talking to the residents and finding out the secret behind the monster appearances. You can also find and collect monster cards that let him battle his friends.

This week’s eShop update for 3DS includes the games listed below. Click on the price of each game to view its official page and description on the Nintendo website:

This week, the Wii U gets Earthbound for $9.99, and a discount sale on liquid platformer Puddle, which is available for $4.49 until August 1st.

This week’s eShop update for 3DS includes the games listed below: