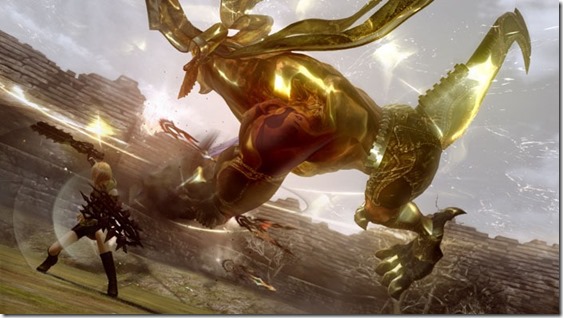 Twitter sharing is coming to Lightning Returns: Final Fantasy XIII, according to a report in Japan’s Dengeki PlayStation magazine. Upon defeating bosses in the game, you’ll be able to share your score via social networks such as Facebook and Twitter.

Dengeki PlayStation’s report also reconfirms that you’ll be able to change the colour of Lightning’s outfits, which is something that was reported in Famitsu magazine last year, shortly after the game was revealed. It’s unclear as to whether this applies to every costume in the game, though.

Lightning Returns: Final Fantasy XIII makes quite a few changes to what you might expect to see in a Final Fantasy game. We reported this past week that the game won’t let you use MP to cast Cure spells. Square also revealed that they’re aiming for an open-world structure with the game, and minimizing load times.

Lightning Returns: Final Fantasy XIII will be released in North America on February 11th, 2014 and in Europe on February 13th, 2014 for the Xbox 360 and PlayStation 3.