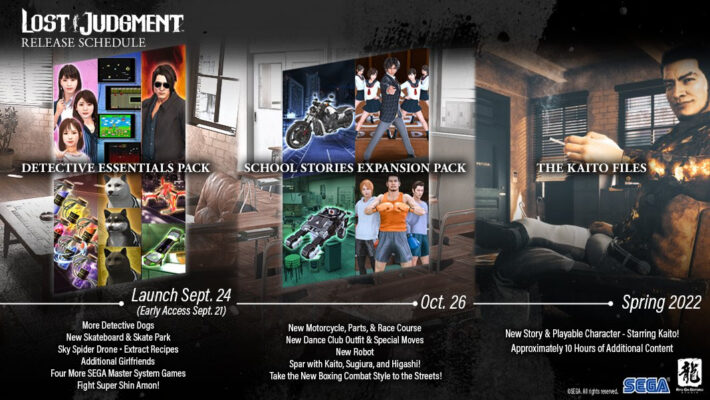 Sega offered details on when people will be able to get all of the Lost Judgment add-ons. Many of the extras will be available not long after launch. However, one piece will take a bit longer to get. The Kaito Files Lost Judgment DLC won’t appear until Spring 2022.

The first round of Lost Judgment DLC will involve the Detective Essentials Pack. That will show up when the game launches. So if someone has early access, they will have it on September 21, 2021. If they don’t, it will appear on September 24, 2021. That gives people extra Sega Master System games to play in Takayuki Yagami’s office, extra Detective Dogs to take on missions, a new Skate Park to visit, a new skateboard, a Sky Spider Drone, some extract recipes, a Super Shin Amon fight, and three more girlfriends.

The second round will involve the School Stories Expansion Pack in October 26, 2021. That primarily features some activities in the school. There will be a new robot to use. You’ll be able to get extra Dance Club moves and clothing. You will get a new Race Course to visit, as well as a new motorcycle and parts to use there. You’ll also be able to box when you fight, with Kaito, Higashi, and Sugiura ready to spar.

Finally, the Spring 2022 The Kaito Files DLC will let people be Masaharu Kaito in Lost Judgment. This will be a ten hour addition story starring him as he deals with an adventure.

Lost Judgment will come to the PS4, PS5, Xbox One, and Xbox Series X on September 24, 2021. People who get the Digital Deluxe or Ultimate Edition can begin playing on September 21, 2021. In case you missed it, Siliconera recently interviewed Localization Producer Scott Strichart and talked about the sequel.