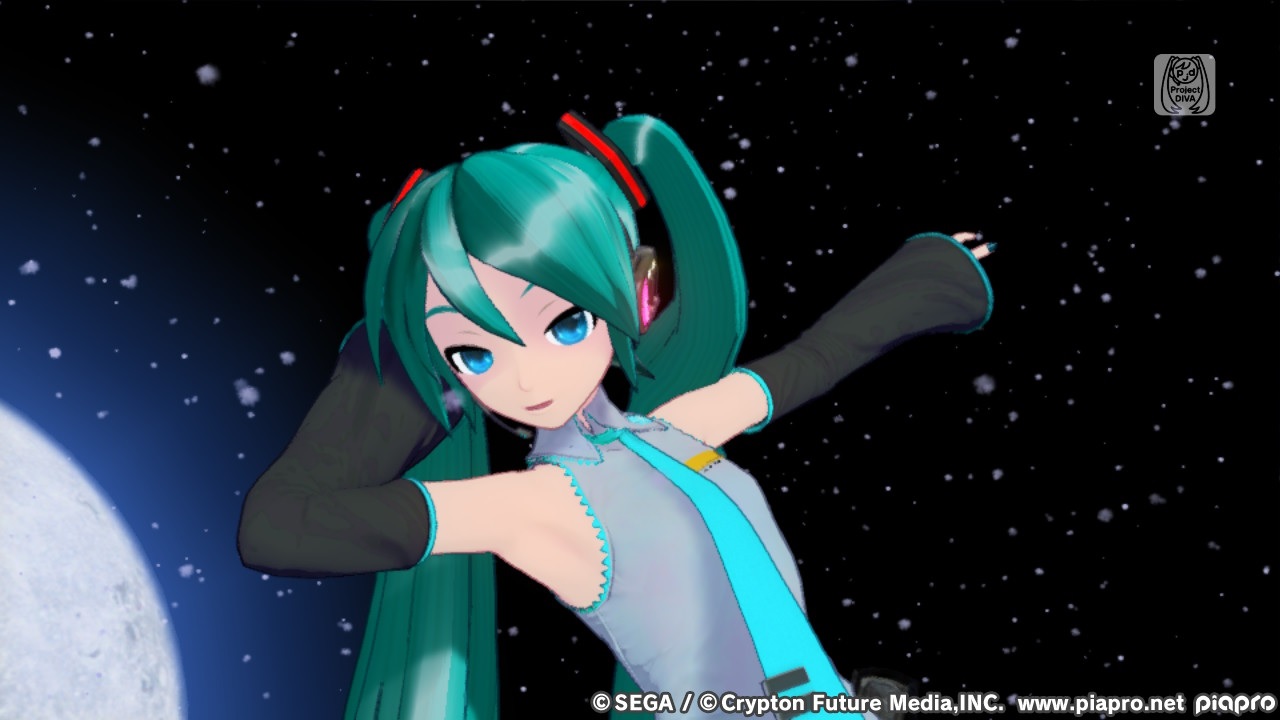 An interesting thing can happen with Vocaloid songs. Since these are characters who don’t have defined roles or personalities, people will sometimes use the music to create personas and situations for all of them. There can be whole story arcs, like the Story of Evil line that begins with Rin’s “Aku no Musume,” or “Black Rock Shooter,” the Hatsune Miku ryo song based on a Ryohei “Huke” Fuke illustration that led to anime adaptations, mangas, and a game. While Hatsune Miku: Project Diva Mega Mix isn’t filled with these sorts of songs and is more of a fond return upon the series’ tenth anniversary, its wide selection helps introduce people to its “stories.”

For example, when you first head to the Hatsune Miku: Project Diva Mega Mix songs, “Acute” is the first track that comes up by, well, virtue of things being in alphabetical order. Which is an appropriate, albeit dark, way to start. This is a love triangle song, where both Miku and Luka are in love with Kaito, but he loves Luka. It is a dark one with a story eventually based on it that highlights the obsessive nature of the affair and a tragedy that ensues. Yet still, right away it shows how the Vocaloid software and these characters can be used to set a stage in such a short period of time and inspire something larger.

It’s one of many telling a tale of one or many characters. “Cendrillon” is a take on the Cinderella story. Except here, Miku meets the prince, Kaito, to kill him and falls in love with him instead. However, fate cannot be escaped. In “Odds&Ends,” the Miku program encourages someone learning to use the Vocaloid software to create something beautiful. “Hello, Planet” follows Miku as an Android attempting to save a plant from a post-apocalyptic and dying world and is fourth in a series of five Doomsday songs by Sasakure.UK. We also have the second Love & Hate song, “Love-Hate,” which follows Len after he’s broken up with Miku, realized he is in love with Rin, and Rin is trying to determine her own feelings and what she wants.

As for tracks to flesh out specific character attributes, there are plenty of Hatsune Miku: Project Diva Mega Mix songs offering potential personality traits. “Sadistic.Music∞Factory” is a fantastic example. It suggests that Miku is constantly hungering for new music, devouring the tracks that people create, and the intense pace and imagery keeps up the pressure even if you aren’t aware of what is being said. There’s also “Tell Your World,” which offers an opposite sentiment that suggests Miku wants to share all songs and music with everyone… rather than chowing down on creators’ creativity. One of the more haunting ones here is “The Disappearance of Hatsune Miku,” which follows her realization that she is a Vocaloid and program, one that is about to be uninstalled.

This doesn’t really happen with the new Hatsune Miku: Project Diva Mega Mix songs. Of them, only one of them attempts to have a storyline. The Luka-led “Dreamin’ Chuchu” follows a young woman who is in love. Valentine’s Day has arrived so, to finally share her feelings, she’s making chocolates as a way to confess. It isn’t as detailed or intricate, but it does give people a chance to see an animated version of “Luka” as she puts all her efforts into preparing something for someone she adores.

There’s just one feature missing that could really have helped people using Hatsune Miku: Project Diva Mega Mix as a means of learning about Vocaloids and their music: translations. While localizations of the actual songs are never a guaranteed inclusion, some releases have offered them. For example, 2014’s Hatsune Miku: Project Diva F 2nd does offer English translations for the lyrics running along the bottom of the screen, which is very helpful for songs with actual stories like “Romeo and Cinderella” or “Love-Hate.” There are no translations here, which is a bit of a bummer, but hopefully some of the tracks with rather obvious stories conveyed, like “Acute,” will prompt players to explore more.

Given the gap between Hatsune Miku: Project Diva Future Tone, which launched in June 2016 in Japan January 2017 outside Japan, and the way the Nintendo Switch has found its way into people’s homes as of late, Hatsune Miku: Project Diva Mega Mix could be some’s entry into the series. People unaware of the sagas some songs can create may not realize the stories they can tell or the way composers and lyricists can use songs to define otherwise blank slate characters. Thanks to a 100-plus track library, the songs here can help set the stage.