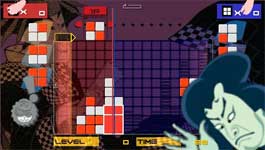 I can’t blame Q Entertainment for trying to milk Lumines as much as possible. It was their first project and a critically acclaimed puzzle game. However, between two PSP games, a Playstation 2 port, a mobile phone version and an Xbox 360 release the only thing that has really changed are the skins. OK, the Xbox 360 version has online play too. After a slew of homebrew PC versions, Q Entertainment is bringing the official Lumines to PCs too. The ESRB has a listing up for it, which makes this the fifth edition of Lumines.