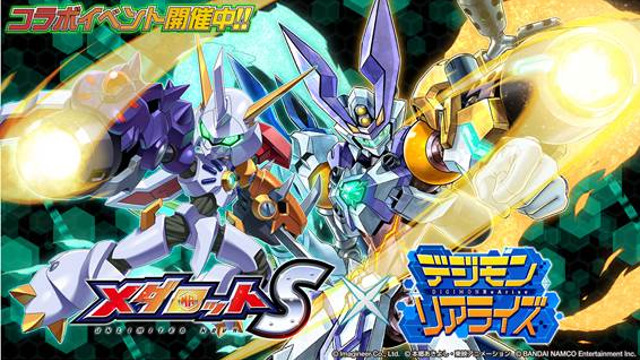 Imagineer and Bandai Namco officially announced a two-way collaboration between Medabots and Digimon. Content from each franchise will appear in the mobile games through collaboration events that run throughout April 2021. [Thanks, 4Gamer!]

This tie-up originated as an elaborate April Fools joke first posted on the Japanese Medabots Twitter account in 2020. Exactly one year later, Imagineer and Bandai Namco both turned this prank into reality with a legitimate collaboration.

This event marks the second major collaboration in Medabots S. Previously in February 2021, the game held its first-ever external collaboration with Ghost in the Shell: SAC_2045.

Bandai Namco also added crossover content to its Digimon products. The Japanese version of Digimon ReArise received the additions of Metabee, Rokusho, and an original combined Digimon called Omedamon. Bandai is also producing a Medabots DiM Card that can be used with the Digital Monster Vital Bracelet.

Medabots S and Digimon ReArise are both available on Android and iOS mobile devices. Although Bandai Namco released a global version of Digimon ReArise, this collaboration exists only in the separate Japanese server due to licensing restrictions.