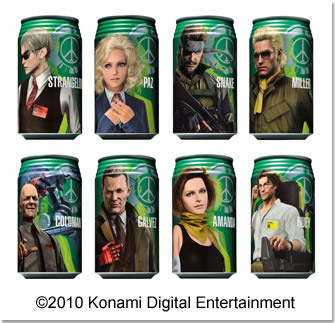 Metal Gear Solid: Peace Walker is scheduled for an April 29th release in Japan. To promote it, Konami are collaborating with Japanese Mountain Dew manufacturer Suntory.

As part of the collaboration, Suntory will be selling 8 Metal Gear-branded Mountain Dew cans for a limited time, throughout the country, starting three days before the game launches. You’ll also be able to spot Mountain Dew cans in Peace Walker itself. According to Konami’s press release, “By having a real product appear in the game, KONAMI enhances the affinity between the game’s story and the real world, enabling users to enjoy the game even more.”