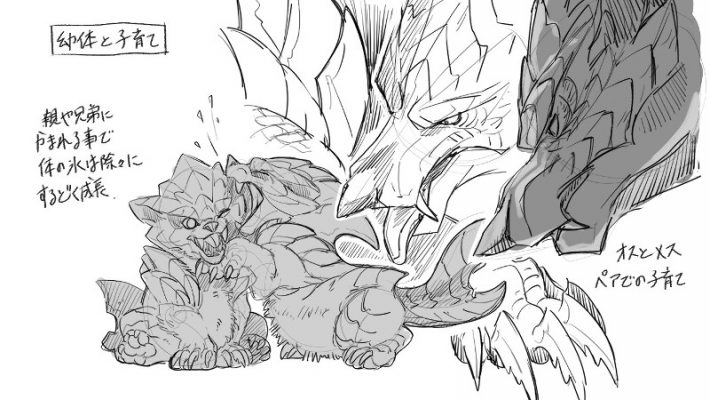 There’s new Monster Hunter Rise Sunbreak concept art from Capcom, and this one shows a litter of baby Lunagaron “puppies.” In some images, they’re being tended to by their parent. In others, they’re going about their daily lives. There’s even one showing a sense of scale for a juvenile version of the fanged wyvern on its hind legs.

Things begin in the top right corner with a pair of Lunagaron puppies and a parent nearby tending to the babies. The two are playing together, with one biting the other. The parent nearby offers a sense of scale to show how its young would look alongside the fanged wyvern. Below it are two images that give a better idea of how a baby would look. One features it running, while the other shows it on its hind legs.

The right-hand side of this Monster Hunter Rise Sunbreak concept art shows further interactions between the Lunagaron and two baby puppies. In one, the parent is presenting the two with some food. The image above it shows a parent would carry a baby by gently grabbing the scruff of its neck. The one below shows a little Lunagaron biting.

Capcom revealed Lunagaron as one of Monster Hunter Rise Sunbreak‘s new monsters during The Game Awards 2021. We also already know what its armor set will look like in-game.

Monster Hunter Rise is available for the Nintendo Switch and PC, and the Sunbreak expansion will arrive on June 30, 2022.