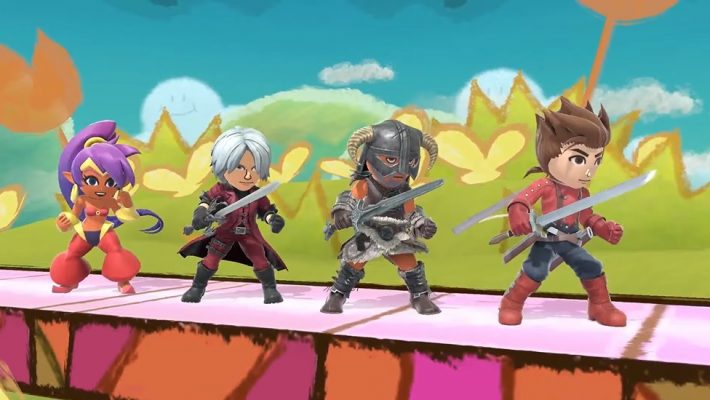 During the Kazuya Super Smash Bros Ultimate presentation on June 28, 2021, we learned about additional character cameos. The next round of SSBU Mii Fighter DLC showed up, and it includes Tales of Symphonia’s Lloyd and Devil May Cry’s Dante. There’s even one with an extra song—Shantae.

Here is the full list of new Mii Fighter costumes for SSBU that will appear alongside Tekken’s Kazuya.

And here’s a trailer looking at those four character costumes in-game.

As usual, the new SSBU Mii Fighter costumes will cost $0.75 each. Each one comes with the character’s outfit and in some cases even weapons will look different.

These are only some of many Mii Fighter character cameos costumes in SSBU. For example, No More Heroes’ Travis Touchdown and the iconic Bomberman showed up in October 2020. When Sephiroth launched in December 2020, FFVII character costumes for Aerith and Tifa appeared alongside Super Mario RPG’s Geno. And in March 2021, Monster Hunter Mii Fighter outfits appeared.

Super Smash Bros Ultimate is available for the Nintendo Switch. The Kazuya DLC and  Mii Fighter costumes will appear on , 2021.