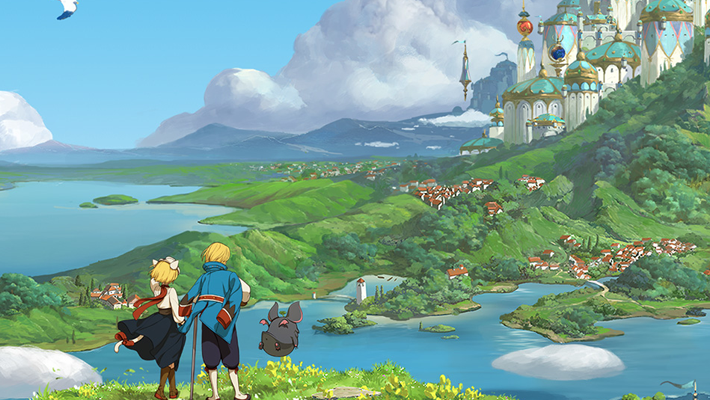 Ni no Kuni: Cross Worlds is a mobile entry that mimics the trappings and aesthetics of Studio Ghibli, much like other Level-5-developed titles. A beautiful, animated introduction immediately sets the tone and provides a brief introduction to story elements that will drive the game forward. With some metatextual commentary, Ni no Kuni: Cross Worlds is candid about its identity as an MMORPG. Its players traverse a fantastical online world. The game shows incredible promise. Like NieR Re[in]carnation or Genshin Impact, it demonstrates just what this particular market is capable of. However, it is held back by aggressive monetization and monotonous mechanics.

Players can select from a handful of different classes, each with their own unique specialization. I picked the Swordsman class, which is supposed to have an equal distribution of attack and defense stats. But this feels mostly insignificant due to the “auto-play” functionality. This includes things like auto-running to objectives and auto-combat. You can turn it off, of course. But it ultimately doesn’t change too much about early gameplay. While Ni no Kuni: Cross Worlds has immediately recognizable visual design, little actually sets it apart from other mobile games of its ilk. I found myself feeling the same kind of exhaustion that I had when playing Lineage II Revolution, another “MMORPG” style mobile game by Netmarble.

While not completely identical, players can effectively set their phone down and let the game do the work. Which isn’t a bad thing for those who want to grind to acquire materials and levels while busying themselves with more important tasks. It just feels completely uninvolved, with its visuals inspired by Studio Ghibli and Joe Hisashi composed score making it noteworthy in that regard. And honestly, those two things absolutely carry Ni no Kuni: Cross Worlds.

The game looks especially impressive on a PC. The vast environments are truly given the opportunity to shine, with sprawling fields of wheat set against beautiful mountain ranges encapsulating that feeling of whimsy. Areas feel densely populated, even without a plethora of player characters running from objective to objective. And it feels like Netmarble really nailed that level of feeling like you as a character are existing in a mostly organic online world.

However, lower end mobile devices may struggle to run Ni no Kuni: Cross Worlds. I experienced several crashes on both Android and iOS. On my Android device, I was unable to get past the initial scripted tutorial area without constant crashes. While the PC version of the game is still in beta, I found it to be the most functional and most enjoyable to watch. Though it is clear the game was wholly intended to play on mobile devices, as the UI is mostly designed to accommodate mobile play. This can make dodging and rolling in combat a bit of a chore. Most of this is alleviated through the auto-play feature I mentioned before.

The character creator in Ni no Kuni: Cross Worlds is fairly limited, with players only able to change their hairstyle, eye color, hair color, and skin color. All options are severely lacking, especially concerning darker skin tones. Only two options are available, with the darkest skin tone looking desaturated. There are also no Black hairstyles in the character creator. Also, the way players can express themselves in game through costumes is fairly limited, with certain costumes only available to obtain through the gacha or by crafting. And Ni no Kuni: Cross Worlds has a lot of gacha elements.

There is a Familiar gacha, which players can use to acquire creatures to accompany them in combat. Each of these Familiars has their unique skills and abilities, which can help players progress through story quests or fight Field Bosses. I was lucky to obtain several three-star Familiars, which got me through a lot of the nearly two-hour introductory segment. There is also the mentioned costume gacha, which is purely cosmetic, and a weapon and armor gacha.

The functionality of these features is mostly the same as other games, with elemental attributes being ascribed to Familiars and weapons. Players will need to rotate between various elements to target the weaknesses of the enemies and bosses they are attacking. Currency is also relatively hard to come by, with a ten pull costing somewhere around $25. And Ni no Kuni: Cross Worlds has several shop pages and tabs dedicated to “special offers” for enhancement packs and paid currency.

Perhaps one of the most glaring issues with Ni no Kuni: Cross Worlds is the inclusion of crypto currency and the implementation of NFTs within the year. The game functions on the “play to earn” model, with players gaining crypto currency earned through normal activities and PvP. This is a massive deterrent for me. Even if Ni no Kuni: Cross Worlds was a more involved and enjoyable game, this alone would make me set it down. There are other games on the market that mechanically do exactly what it does, but without crypto currency and the promise of NFTs looming in the future.

It’s a shame, because Ni no Kuni: Cross Worlds is a beautiful game. It’s just engaging with it that seems to be the problem. The game is inundated with alerts to spend money on paid currency and other packs. The implementation of crypto currency and NFTs also leave a sour taste in my mouth. Ultimately, it is a game that shows a lot of promise, but is squandered by the constant attempts at monetization and a lack of a truly engaging system.