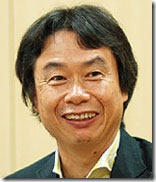 Meanwhile, Miyamoto himself will focus on nurturing even younger designers at the company.

For years, Miyamoto has served as a supervisor for numerous Nintendo games, from Mario to Zelda to Metroid. Sometimes his involvement is hands-on, while other times, he lends his assistance in an advisory capacity. However, in the case of recent Nintendo games like The Legend of Zelda: Skyward Sword and Super Mario 3D Land, Miyamoto’s involvement hasn’t been as prominent as it may have been in years past.

In the case of Super Mario 3D Land, for instance, the game was conceived by one of the directors of Super Mario Galaxy 2. Miyamoto himself says he feels comfortable putting more distance between himself and such projects because his staff have done a good job with the recent Mario and Zelda titles by themselves.

“The reason why I’m stressing that is that unless I say that I’m retiring, I cannot nurture the young developers,” he said. “After all, if I’m there in my position as it is, then there’s always kind of a relationship. And the young guys are always kind of in a situation where they have to listen to my ideas. But I need some people who are growing up much more than today.”

While he didn’t mention any specifics, Miyamoto says he hopes to begin working on a new project in 2012, and show the game off publicly within the year.

“What I really want to do is be in the forefront of game development once again myself,” Miyamoto said. “Probably working on a smaller project with even younger developers. Or I might be interested in making something that I can make myself, by myself. Something really small.”