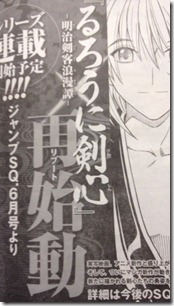 Rurouni Kenshin manga-ka, Nobuhiro Watsuki, has put his Embalming manga on hold until next fall. In the meantime, Watsuki will be penning a short Rurouni Kenshin series, set to begin serializing in Jump Square magazine in May 2012.

Anime News Network point out that, while Shueisha are advertising the new Kenshin series as a “reboot,” this may not be the same as the English interpretation of the word.

The Jump Square issue with the new Rurouni Kenshin manga will be published on May 2nd, 2012 in Japan.

Other Rurouni Kenshin projects slated for released next year are the live-action movie (August 25th), and part 2 of the New Kyoto Arc OVA, planned for release in summer 2012.